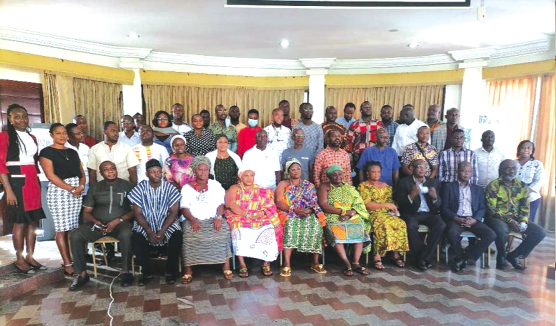 A gender specialist, Mrs Rebecca Teiko-Sarbah, has emphasised that both men and women ought to participate in all stages of natural resource management (NRM) programmes.

She said NRM programmes could increase work burdens if gender was not considered, and so such programmes needed to consider all consequences of any intervention and how it might affect all members of the community.

“NRM programmes must consider and be aware of the different roles played by men and women. If the programmes do this, they will be more likely to consider the other half of the population and address the needs and concerns of all major users of natural resources.

“This would avoid negative repercussions on the community and the environment,” she said during the 12th civil society organisation’s (CSOs) annual review forum on natural resources and environment sector.

It was on the theme:“Sustained Natural Resources and Environment Governance (NREG): Impacts of CSOs intervention in Ghana”.

Speaking on “Relevance of gender integration or inclusion in NREG-the role of CSOs”, Mrs Teiko-Sarbah noted that gender played an important role in the choice of socio-economic activities in rural areas and it was a source of social injustice.

Therefore, it was necessary to raise awareness of the need for gender consideration in the natural resource sector.

“What is the impact of the policy, programme, project or intervention on women and men? For these reasons, there is the need for representation, participation and inclusion of all relevant stakeholders,” she stressed.

She said integrating gender equity was a matter of human rights and ensuring social justice, which was also essential for the sustainable use and management of natural resources.

“Besides, women are in the best position to ensure the guardianship of biodiversity, since they are mostly small scale farmers and provide food security and water for families as well as communities,” she added.

The forum also served as a stock taking endeavour on the impacts of Kasa Initiative Ghana, and its coalitions work over the past 10 years.

Kasa is a civil society support mechanism aimed at promoting evidence-based research and advocacy in the natural resource and environment sector.

Participants were mainly representatives of civil society coalitions and NGOs representing the seven key areas of the natural resources sector and some selected queen mothers.

The Coordinator of Kasa, Mr Jonathan Gokah, explained that the mechanism was necessitated by the fact that even though Ghana was endowed with natural resources, the country’s economic model continued to increase her dependence on her natural wealth.

“This has placed premium on resource extraction associated with increased environmental cost that exacerbates poverty among the people, which, if not addressed by the state, could create a situation where the cost would outweigh the benefits,” he said.

Thus, he said, the Kasa Initiative started in August 2008 as a two-year pilot to build capacity of civil society networks, coalitions and media groups to effectively engage with government and pursue concerted advocacy agenda aimed at poverty reduction.

The CSOs shared with other stakeholders documented stories on the impacts of their work in their operational areas, aimed at deepening awareness and visibility, as well as enhance knowledge.