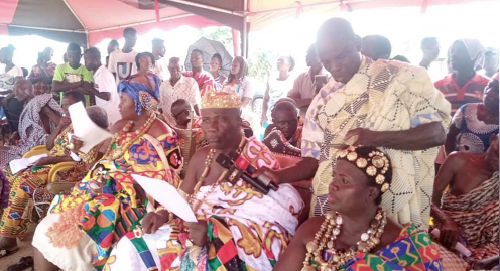 Nana Amoa VIII (middle), the Chief of Amosima, delivering his address at the festival
30.5k Shares

The chiefs and people of Amosima in the Abura Asebu Kwanmankese District in the Central Region, have celebrated their Kae Ako Festival, with a call on the community to rekindle its communal spirit to accelerate development.

The theme for the festival was, “Unity and development -Our Passion”.

Delivering a speech at the durbar, the Chief of Amosima and Nyimfahen of the Asebu Traditional Area, Nana Amoa VIII, stated that it was time Ghanaians brought back communal labour which was the foundation of most communities.

Nana Amoa said the spirit of communalism in time past helped the community to make some developmental gains and said it was time to reignite that spirit and do more.

He observed that if the community waited on government to reach the community with every development infrastructure, it would delay the pace of development and therefore appealed to all and sundry to participate in communal labour.


The Kae Ako Festival is celebrated every year in remembrance of a great hero of the community, Ako, who offered to be sacrificed to save the people of Asebu during the outbreak of an epidemic.

Some activities of the festival included a float, sporting competition, clean-up exercise, consecration of shrines, health walk, a vigil by churches and gospel rock show among others, to create awareness to nearby communities and residents outside the community.

Hundreds of people from the community and outside joined in the celebrations.

Nana Amoa stated that while the leadership preached unity to be able to develop Amosima, there was a small fraction of the people who had the penchant for disturbing the peace and unity of the area and urged all to forge ahead in peace.

He appealed to the conscience of those elements to eschew all unpatriotic behaviour and support the development agenda of the area.

Nana Amoa spoke about the construction of the Eguase-Amosima road, which he noted was in a terrible shape. He called on the government to help put the road in good shape.

He also called for the construction of the Eguase-Amosima-Abura-Edukrom through to Nkamfoa road and also the Amosima to Akroma road to be constructed.