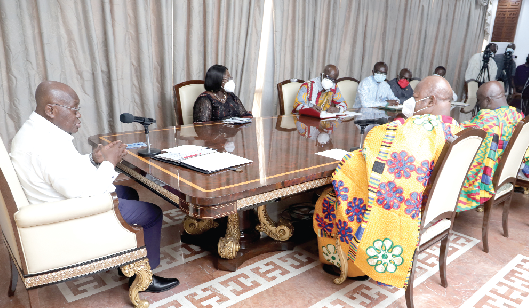 President Nana Addo Dankwa Akufo-Addo has called for more cooperation between the government and chiefs to bring progress to the nation.

He said the involvement of chiefs in the governance of the country was important, adding: “I welcome at all times any expression of cooperation, assistance, criticism or whatever it may be which will help advance the cause of our nation.”

The President made the call when the Eastern Regional House of Chiefs, led by its President, Nene Sakitey II, paid a courtesy call on him at the Jubilee House in Accra.

According to the President, the government benefited much from traditional authorities, particularly the rich knowledge of their respective areas and the many years of experience they had in the governance system.

He, therefore, said it would be foolhardy for any well-meaning President to ignore the authority of traditional leaders and the possible benefit of their contribution to the welfare and progress of the nation.

President Akufo-Addo commended the chiefs for acknowledging his good works and gave an assurance that he would continue to offer his best to advance the welfare and progress of the nation, adding: “To be able do so, I will need your support and cooperation.”

He expressed concern over the chieftaincy disputes in the Eastern Region and their impact on the advancement of the people and the region.

He said just as some chieftaincy disputes, such as the protracted Dagbon conflict, had been settled in his tenure, so would other disputes, including those in the Eastern Region and Bimbilla in the Northern Region, be resolved.

The President gave an assurance that the government would make it a priority to resource the judicial committees of the various houses of chiefs for them to be able to sit regularly to bring finality to conflicts.

He said work (furnishing) would soon be completed on the house of chiefs building in the region for it to be opened for business.

He further said he was impressed by what the chiefs referred to as the ‘11th Commandment’ — ‘Thou shall not destroy the environment’ — and urged all to work assiduously to protect the environment.

Nene Sakitey, who is also the Konor of Manya Krobo, commended the President for his leadership role in containing the spread of the COVID-19 pandemic and said with the emergence of more variants of the virus, it was incumbent on all to continue to adhere to the safety protocol to protect not only themselves from contracting the disease but also their families, colleagues and neighbours.