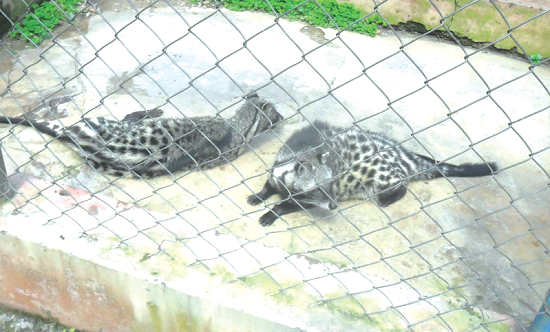 The Kumasi Zoological Gardens which was shut down some months ago due to weak cages and walls has been opened to the public.

Officials said the continued operation of the zoo at the time of closure posed a threat to human lives since the animals could have broken out of their cages easily.

Established in 1957 as the country’s premier national zoo and officially commissioned by President Kwame Nkrumah on October 11, 1958, it was founded to help people understand how animals live in order to help protect and preserve their natural habitats.

The zoo sits on an 11-hectare land located within the Kumasi Metropolis (near the new Kejetia Market). Many of the original animals in captivity at the time were totems for many Akan speaking clans.

The facility is under the ambit of the Forestry Commission, and at the reopening ceremony last Saturday, the Chief Executive Officer of the Commission, Mr John Allotey, said the zoo had undergone immense transformation over the years, particularly with regard to new and diverse animals species, including primates, cats, reptiles, rodents, ungulates and birds that had been introduced.

He said, among others, the zoo would serve to showcase the country’s local and exotic fauna and would as well be a centre where educational programmes on conservation would be conducted to get the public informed about wildlife.

“The zoo will present itself as an avenue for scientific research into various aspects of wildlife biology and ecology as well as a sanctuary for orphaned animals,” he said.

Mr Allotey said since the zoo was located in the heart of the city of Kumasi, and was a major tourist attraction, it would be a centre for relaxation and leisure for visitors.

He promised to make the zoo one of the best in the sub-region and urged the locals to patronise it.

The Manager of the Kumasi Zoo, Dr Meyir Yiryele Zieka, said the zoo currently had 196 animals of 54 different species.

He said plans were underway to import more animals to enhance attraction and give tourists the opportunity to see different kinds of animals while also serving as a research centre for animal scientists.

“It will also serve as a haven for animals currently facing extinction in the country,” he said.

He appealed to stakeholders to help preserve the animals and also support efforts the government was making to reposition the Kumasi zoo as a major tourist attraction in the country.

The Amakomhene, Nana Adu Mensah Asare, who represented the Asantehene, Otumfuo Osei Tutu II, expressed his appreciation to the Forestry Commission for reopening the zoo.

“Since life become boring without nature, I will encourage all and sundry to visit the zoo and enjoy the excitement it offers as well as use the facility wisely,” he said.