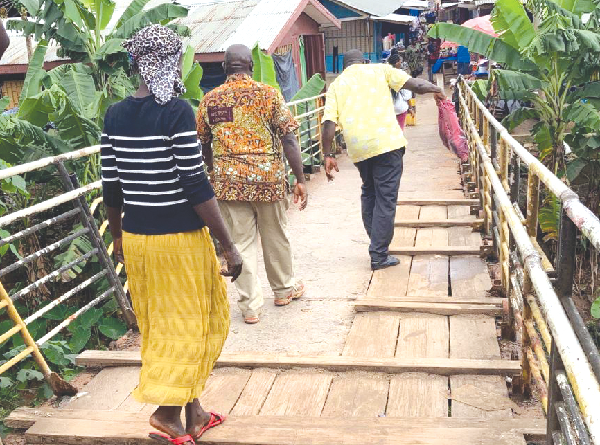 Some pedestrians using the footbridge at the Race Course Market in Kumasi
30.5k Shares

The footbridge at the Race Course Market in Kumasi has now become a death trap.

The metal bridge is growing weaker and weaker as the days go by, posing a serious risk to users of the facility.

This was evident from the fear seen on the faces of the users as they crossed the bridge when the Daily Graphic news team visited the market last Wednesday, September 14, 2022.

The bridge was constructed with metals, but with time some portions became rusty and the city authorities had to improvise with wooden slabs.

However, the bridge is fast deteriorating and one can easily see the gorge/drain through the rusty metal bridge anytime the facility is used. 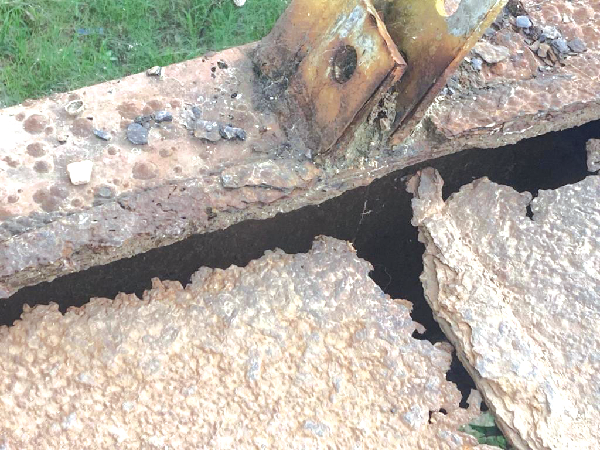 The metal rails, meant to prevent pedestrians from falling into the about 20 feet drain, are giving way and no user dares touch them, or lean on them when using the walkway.

Traders and shoppers, who daily use the bridge, do not have much of a choice but will rather risk their lives, given the long winding route they have to endure before they can have access to that section of the market.

A 72-year-old trader, Maame Yaa Dufie, told this reporter, “I would rather risk my life crossing the bridge, than using the long winding route to access the market.”

A head porter, who only gave her name as Aisha, said she no longer use the bridge because of the heavy load she carried on her head
and that anytime she used it she felt insecure.

“I rather use the long winding route and charge customers additional rates,” she said.

The bridge links directly to the middle of the market, making it a strategic path for sellers and buyers.

At a time that an estimated 1,200 traders who were evacuated from the central business district area have moved in their numbers to the market, and the pressure exerted on the already deteriorating bridge calls for immediate attention to avert this looming danger.

The bridge, built barely five years ago, was constructed by Contracta construction firm, as part of some peripheral works carried out on the sidelines of the Kejetia/Central Market Redevelopment project.

Other ancillary works included toilet facilities, which were also built at some satellite markets, including the Afia Kobi Serwaa Ampem Market, popularly known as Abinkyi Market, where the affected traders were temporarily relocated.

Their evacuation paved way for the commencement of the second phase of the turnkey project, which is steadily progressing.

In an interview with the Administrator of Bantama Sub Metro and Kumasi Metropolitan Assembly, Oliver Opoku Yeboah, he said the assembly was aware of to the deteriorating nature of the bridge and was working round the clock to fix it for it to serve traders and buyers well.

“Barely a week ago, the Metropolitan Chief Executive, Samuel Payne, together with some officials of Contracta, was here to inspect the facility and see how we could put it back to shape,” he said.

Mr Opoku Yeboah stated that the contractors had assured the assembly that it would immediately carry out some checks on the bridge. He urged the general public to exercise restraint since their plight remained the assembly’s utmost concern.