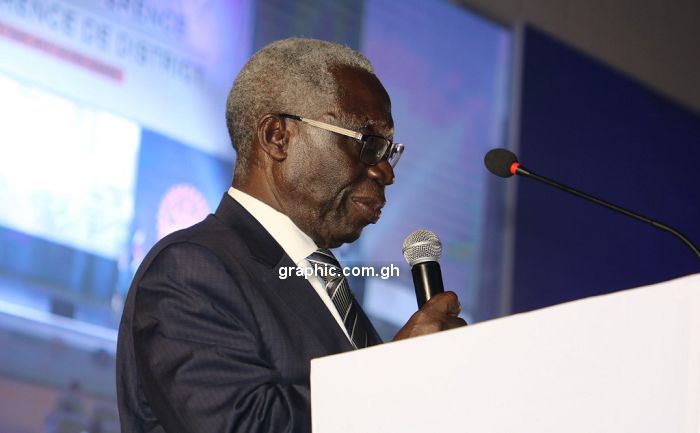 ECOWAS member states have been urged to urgently prioritise the participation of women and the youth in the democratic governance process.

This is to ensure that the youth, in particular, do not become vulnerable to be exploited by violent extremists and terrorists, which could threaten the peace and security of member states in the sub-region.

The Senior Presidential Advisor, Mr Yaw Osafo-Maafo, made the call during the closing ceremony of the two-day 2021 Kofi Annan Peace and Security (KAPS) Forum in Accra.

Mr Osafo-Maafo emphasised that the exclusion of the youth from the political process and unresolved grievances “make them vulnerable to be radicalised by terrorists or violent extremist groups".

The forum, jointly organised by the Kofi Annan International Peacekeeping Training Centre (KAIPTC) and the Kofi Annan Foundation in Geneva, was dubbed: “Democracy and Governance in the Context of Complex Crises in Africa”.

It is the biggest gathering of leaders on the continent in memory of the late Kofi Annan, a former UN Secretary General, widely considered a fiery advocate of peace and security across the globe.

Mr Osafo-Maafo intimated that apart from the role some youth on the continent had played in bringing down the regimes of different leaders recently, it was also important to note that extremists were always on the lookout to exploit agitated youth, stressing that “the threat of these groups increase when they succeed in exploiting the grievances of the youth to breed locally owned extremist groups.

“Consolidating democracy in Africa cannot be achieved without the youth because, according to reports, in 2019, almost 60 per cent of Africa's population was estimated to be under 25 years, which makes Africa the continent with the world’s youngest population,” the Senior Presidential Advisor further pointed out.

On women’s role and participation in good governance and democratic consolidation, Mr Osafo-Maafo observed that Ghana had witnessed the dynamism of women in heading the judiciary, universities and the electoral body.

That, he said, had proven that all could be possible when women were well positioned and given the power to act independently.

“As we focus on building our individual democratic states, we must remember to support one another, knowing that instability in one state will affect other states. Therefore, inter-state collaboration at all levels is important to ensure that together we promote peace and security in Africa,” he emphasised.

He said elections, as part of the democratic process, had become trying times for African countries, adding, however, that clean and peaceful elections “in our part of the world have rather been described as boring because the world is used to seeing violent protests and disputes as synonyms for elections in Africa. I think the time has come for that image to change".

Mr Osafo-Maafo said the implementation of the ECOWAS Protocol on Democracy and Good Governance could be improved and consistently applied “in our quest to improve governance in the sub-region”.

He noted that the African Union (AU) was encouraging member states to adopt and implement the AU's initiative on Country Structural Vulnerability and Resilience Assessment (CSVRA) towards structural prevention of conflict and consolidation of peace and stability on the continent.

He explained that the KAIPTC was one of the focal institutions which helped to develop the report on Ghana.

Mr Osafo-Maafo further observed that if there was one thing learnt from the ravages of the COVID-19 pandemic, it was the importance of embracing digitisation or digitalisation.

He said while those processes would enable countries in the sub-region, including Ghana, to conform to the protocols of the new normal, it would also promote transparency and accountability in political and social structures.