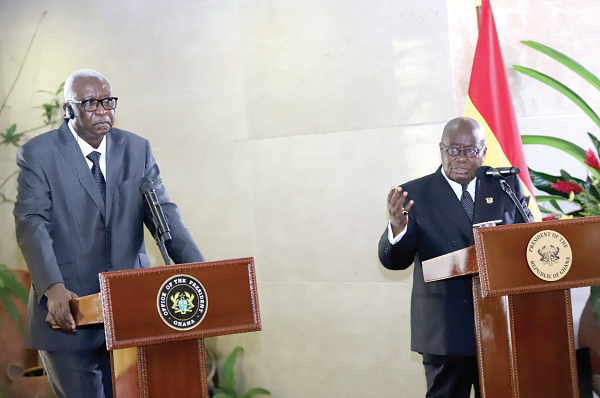 The Head of the Interim Government of Mali, Mr Bah N'Daw, has lauded President Nana Addo Dankwa Akufo-Addo for his immense role in mediating the crisis in Mali, leading to the restoration of stability in that country.

He said just as President Kwame Nkrumah had played a pivotal role in the Pan-African movement, President Akufo-Addo, as Chairman of the Economic Community of West African States (ECOWAS), had been able to “successfully bring peace between fighting brothers who have different points of view”.

President N’Daw made the commendation when he paid a working visit to the Jubilee House as part of his tour of some ECOWAS countries.

The visit was also to show appreciation to President Akufo-Addo for his untiring efforts in helping to bring peace to Mali.

The retired Army Colonel and former Defence Minister in Mali was sworn in as Mali’s interim President on September 25, 2020 after a military coup on August 18, 2020 had overthrown the embattled former President, Ibrahim Boubacar Keita.

The coup leader, Colonel Assimi Goita, was last Friday sworn in as Vice-President of the transition team at a ceremony in Bamako, the Malian capital.

After receiving the chairmanship mantle of ECOWAS in September this year, President Akufo-Addo’s first working visit outside the country was Mali, where he held consultations with the interim President and other government officials to assess the progress made in the transition process and reaffirm ECOWAS’ solidarity with the people of Mali.

President N’Daw said it was to show appreciation to the work of President Akufo-Addo that he and his delegation had decided to make Ghana their first stop, adding that they had always admired the leadership role of Ghana in the work of Pan-Africanism.

He further pledged to work towards uniting the people of Mali and also lead them through the democratic process to ensure peace and stability in the country.

In response, President Akufo-Addo expressed appreciation to the interim government for ongoing efforts at calming tension and resolving the prevailing social, economic and political crisis in that country.

He urged the government to work towards finalising the electoral process within the set time frame.

“It is important that all actors in the Malian space continue to pay particular attention to the implementation of the 2015 Algiers Accord, which provides the framework for the re-establishment of state authority over the entire territory of Mali,” he added.

He said that strategic relationship had led to one of the seminal events that paved the way for the establishment of the African Union's predecessor body, the Organisation of African Unity.

“I'm hopeful that we can work together to help bring progress and prosperity not only to the Malian people but also the ECOWAS community.

“This generation of African leaders must not fail the long-suffering African masses. We must help bring dignity and prosperity to our continent and its peoples,” the President said.

Malians began protests over the Presidency of former President Ibrahim Boubacar Keïta in June 5, 2020, asking him and his Cabinet to resign.

Efforts at mediation to restore peace and calm, led by the then ECOWAS Envoy, former President Goodluck Jonathan of Nigeria, yielded little result.

On August 18, this year, some members of the Malian Armed Forces staged a coup to topple the government of President Keita.

When he was elected Chairman of ECOWAS at the 57th Ordinary Session in Niamey, Niger, last September, President Akufo-Addo continued with the mediation process and hosted a special ECOWAS meeting at the Peduase Lodge on restoring political stability and peace in Mali.

The meeting, which was also attended by the leadership of the military junta, set out a roadmap to restore power to an elected president.