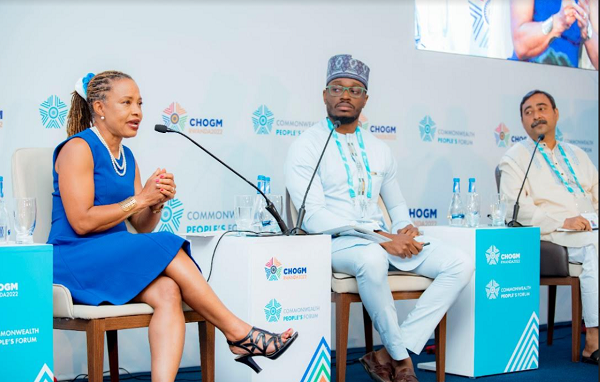 Delegates at the Commonwealth Heads of Government Meetings (CHOGM2022) have called on Commonwealth heads of States to adopt and implement Commonwealth Principles on Freedom of Expression to advance Press Freedom in their countries.

Speaking at the People’s Forum in Rwanda, delegates stressed the urgent need for governments of the Commonwealth States to pass and abide by the Commonwealth principles on free press and freedom of information to avoid a crisis of trust between the citizens and the state.

Governments are urged to subsequently amend and introduce compatible national legislation where there is none.

Speakers Bemoaned the implementation paralysis gripping countries where impunity for crimes against journalists have become pervasive.

Commonwealth countries have suffered a marked increase un the number of threats and violent assaults, including murders as well as arrests and imprisonment in the course of their work.

Countries like Sierra Leone, Nigeria, The Gambia, Ghana and Rwanda recently fell below the top 40 on RFI’s World Press Freedom Index. With Ghana falling 30 places to place 60 out of 180 countries.

Director-General of the Commonwealth Foundation, Dr. Anne Galagher opined, that although there is a need to encourage responsible behaviour, the mindset should not be to repress or suppress the people’s voice.

Bangladeshi investigative journalist, Julfikar Ali Manik proposed policy solutions such as enacting digital security laws to help protect journalists in the discharge of their duties online. He encouraged the creation and strengthening of robust unions to hold Governments accountable where they falter.

He explained that the welfare of journalists depends on their unions putting pressure on media owners because media freedom and freedom of expression depend on freedom of association and collective bargaining.

Nigerian researcher Dr. Saeed Husaini cautioned countries to avoid a situation where governments interfere brazenly in freedom of expression as witnessed during the end SARS protests in Nigeria and the ensuing Twitter Shutdown.

They have also made other commitments to protecting the role of the media in earlier agreements such as the Latimer House principles on the separation of powers.

Commonwealth Principles on Freedom Of Expression

The Commonwealth Principles on freedom of expression and the role of the media in good governance are the result of deliberations between the Commonwealth Journalists Association and are aided by additional input from sources of expertise across the Commonwealth.

They are intended to serve as a set of clear guidelines to assist member states and their agencies, as well as Commonwealth legislatures and judiciaries, to protect the role of the media in promoting and developing democratic, accountable and open societies, in accordance with Commonwealth values, international norms and standards, and the United Nations’ 2030 Sustainable Development Goals.

The development of these principles has been inspired by the example of the Latimer House Principles, which, as the Secretary-General of the commonwealth Patricia Scotland has said ‘emerged from a small informal ginger group of experts within Commonwealth professional associations’. It also follows the Latimer House approach by placing the role of the media as the fourth pillar of democratic governance.

There is a reciprocal relationship between freedom of expression and the making of a safe and enabling environment for journalists and the proper democratic functioning of the three branches of government. Accordingly, the principles include guidelines concerning relationships between the media and the judiciary, parliament and the executive. It is hoped that in due course they will be adopted by the Commonwealth as a ‘manual of good practice’ in matters related to the role and status of the media in a way which complements the Commonwealth (Latimer House) Principles.

The Commonwealth Principles on Freedom of Expression and the Role of Media in Good Governance are:

2. Restrictions on freedom of expression

Any restrictions on freedom of expression should be in accordance with standards established in international human rights law, such as those set out in the International Covenant on Civil and Political Rights. Restrictions such as those which are essential to prevent incitement to violence, hatred or discrimination, should be prescribed by law, and necessary and proportionate in pursuit of a legitimate aim.

Member states are urged to repeal or amend laws which unduly restrict the right to freedom of expression, such as laws on sedition which criminalise speech. Public insult and defamation laws should exclude criminal sanctions, including custodial sentences, and in civil cases there should not be excessive or disproportionate awards of damages. Truth and public interest defences should be recognised by law and journalists’ sources should always be protected unless an independent judicial authority has accepted an exceptional overriding public interest in disclosure. The rights of whistle-blowers should be protected by appropriate legislation.

Access to information held by public authorities is key to promoting transparency, good governance and the full participation of citizens in the democratic process. Member states are urged to enact and implement Right to Information legislation in line with international standards, taking account of the Commonwealth Freedom of Information Principles which were endorsed by Commonwealth Law Ministers and noted by Heads of Government in Durban in 1999. Official Secrets Acts and other laws and measures which provide for secrecy should be construed narrowly and apply only where disclosure poses a demonstrable risk of harm to national security, subject to a public interest test.

4. Parliaments and the Media

Open, two-way flows of information between Parliaments or legislatures and the media and the public are essential to enfranchise the public and ensure that legislators are informed about public opinion. Parliaments and Members of Parliaments should protect the right to freedom of expression and respect the role of the media in informing the public and holding elected governments to account. Parliaments and elected bodies should facilitate media coverage of their proceedings and provide journalists with information without unreasonable restrictions. Parliaments should respect the right of individuals and of the media to comment on their actions and performance. Criminal and defamation laws should not be used to restrict legitimate criticism of parliament.

5. Judiciaries and the Media

The rule of law, including the independence of the judiciary, is essential in order to uphold the right to freedom of expression, other human rights and the democratic process. The judiciary should promote open justice and facilitate media access to the courts for the reporting of proceedings. The media have a responsibility not to undermine the authority or independence of the judiciary and to communicate judicial decisions to the public fairly and accurately. The criminal law and contempt proceedings should not be used to restrict legitimate discussion of matters concerning the judiciary and the courts. Judges and lawyers should not be threatened or abused for upholding judicial independence or defending freedom of expression.

6. The role of media in elections

The essential role of the media in the democratic process, especially during times of elections and referenda, should be promoted and protected by all relevant public bodies. Election Commissions and other official bodies responsible for regulating the media during elections should operate under rules that ensure their independence, the independence and impartiality of election processes and equitable access to the media
for all parties and candidates. The public should have ready access to reliable information from diverse sources concerning electoral processes and members of the media should be afforded protection from threats or acts of violence at election times.

7. The safety of journalists

Member states are urged to put in place effective laws and measures to establish a safe and enabling environment for journalists to work without fear of attack, intimidation or interference, and to take prompt measures to protect them when they face a serious threat of harm or are subject to attack. Protection should extend not only to professional journalists and media personnel but also to bloggers and others who engage in forms of self-publication in print, on the Internet or other media. Governments should ensure that the judiciary, law enforcement officers and military personnel are cognisant of international human rights and humanitarian law obligations relating to the safety of journalists and their protection as civilians in situations of conflict. Media owners should provide their employees with adequate training, equipment and support to operate in dangerous environments and appropriate assistance in emergencies.

Member states are urged to act decisively to end impunity through impartial, prompt and effective investigations into all alleged cases of killings, attacks and ill-treatment of journalists and media workers,
by prosecutions to bring the instigators and perpetrators of such crimes to justice and by the provision of effective redress for the victims. Member states are urged to uphold United Nations Resolutions on the safety of journalists and the issue of impunity, to implement the UN Plan of Action and to cooperate with the annual requests by UNESCO’s Director General for information on judicial follow-up to the killing of journalists.

Media organisations and journalists should set and supervise their professional standards and codes of practice. Journalistic ethics require that the media should report accurately and fairly, issue corrections, allow a fair opportunity to reply when appropriate and, subject to legitimate public interest, respect the right to privacy, particularly of minors.

Media owners are urged to recognise that ownership entails a commitment to inform citizens about matters of public interest and not merely to advance partisan or personal interests. It is part of the media’s responsibility to ensure that journalists are adequately trained and that their private interests do not distort their reporting of public issues. Media and journalists’ organisations should establish credible complaints systems to adjudicate on alleged breaches of professional codes of practice and to provide members of the public with effective redress for unprofessional behaviour.

Any system of media regulation should be the least restrictive necessary for a well-functioning democratic society. It should uphold the media’s independence and its role in informing people about matters of public interest. It should promote media plurality and access to the media for all, including those belonging to linguistic and cultural minorities, without discrimination on the basis of race, colour, religion, gender or other grounds. It should include mechanisms to prevent undue concentration of media ownership and to make ownership transparent.

11. Observance of these Principles

Member states are urged to promote the widest possible awareness of these principles and to ensure their observance by setting up and supporting independent and accountable oversight bodies free from political and commercial interference, such as Information Commissions, Human Rights Commissions, Election Commissions, Independent Broadcasting Authorities, Telecommunication Regulators, Ombudsman’s offices and appeals procedures in accordance with international norms and appropriate domestic legislation. Member states are encouraged to cooperate fully with international mechanisms, such as international and regional rapporteurs, the UN Human Rights Council’s Universal Periodic Review and UN Agencies advancing the achievement of the Sustainable Development Goals.