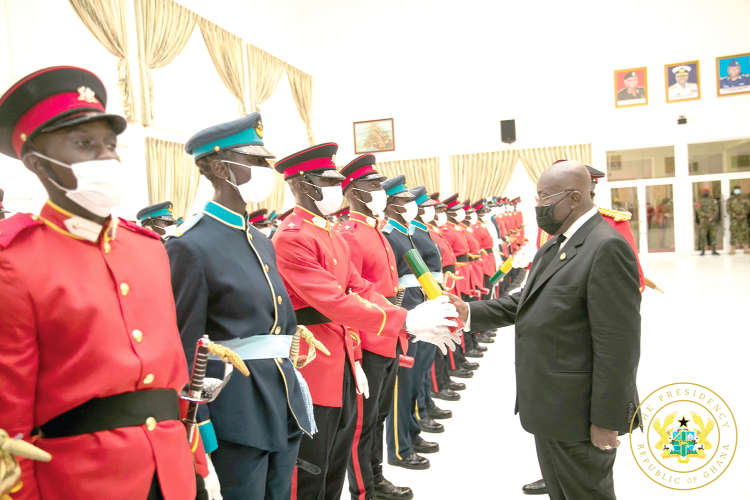 In line with that, he also pledged to work towards turning the Ghana Military Academy into a world-class institution for the training of officers to face contemporary security challenges.

“In view of the growing threats to peace and stability in West Africa, our actions in this regard cannot be business as usual,” the President said.

President Akufo-Addo made the commitment at the graduation ceremony of military officer cadets of Regular Career Course 60 and Short Service Commission and Special Duties Course 58, in Accra yesterday.

A minute of silence was earlier observed in honour of former President Jerry John Rawlings who passed away in Accra last Thursday.

In all, 168 cadet officers graduated.

At a similar ceremony last year, President Akufo-Addo affirmed his government’s commitment to equip the GAF, and also improve infrastructure in the barracks to boost morale and the operational efficiency of personnel.

“A year on, I am able to state that the first phase of the reconstruction works of the Ghana Military Academy is almost complete.

“The renovated Officer Cadets’ Mess and the new Academy Parade Square have been completed and are fully operational as we can all see today.

“The administration block with its offices and conference rooms and a two-storey classroom block are all nearing completion,” the President added.

The Commander-in-Chief said the second phase of the infrastructure development project which would include an auditorium, accommodation for commanders and other utility structures would be completed by December 2021.

“The second phase of the project, which includes the construction of an auditorium with 800-seating capacity, an accommodation for cadets and platoon commanders, and a wall around the entire Military Academy with other utility structures will be completed by December 2021,” he said.

The President also said that the government was equipping and rehabilitating training facilities of the GAF.

He further mentioned the commissioning of the Ghana Navy base at Nutekpor and said the Bondase training camp was also going to receive a facelift.

“The government has also committed over $200 million for the purchase of more armoured vehicles for the Army and the upgrading of equipment and surveillance capacity of the security and intelligence agencies,” the President added.

He said the rationale for the investments is to ensure that the men and women in uniform were well equipped and motivated to deliver on their mandate of safeguarding the peace, integrity and security of the nation, as well as maintaining the country’s contribution to international peace and security.

President Akufo-Addo urged the graduating officer cadets to maintain a healthy relationship with the civilian population for national integration and cohesion.

“I am reminding you today that your commission into the Armed Forces places great responsibility on you to guard against the temptation of using the uniform to intimidate your civilian counterparts who are your partners in the development of our nation, and whose taxes provide the means for your sustenance as members of the Armed Forces,” he said.