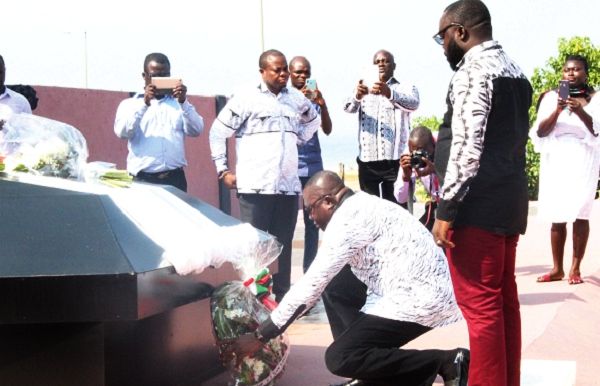 The atmosphere at the Asomdwee Park, the final resting place of the late President John Evans Atta Mills, was one of solemnity and reflection as hundreds of people gathered there to lay wreaths as part of activities marking the seventh anniversary of his passing.

The people, dressed in white and black apparels, included relatives of the late President, National Democratic Congress (NDC) Members of Parliament and supporters, former government appointees and members of the public.

The first wreath was laid by the National Chairman of the NDC, Mr Samuel Ofosu Ampofo, on behalf of former President John Dramani Mahama.

The General Secretary of the NDC, Mr Johnson Asiedu Nketiah, laid one on behalf of the NDC, while three other wreaths were laid by the family and the friends of the late President and the sporting fraternity.

In a speech delivered on his behalf, Mr Mahama eulogised the late President, saying that Ghana owed him a debt of gratitude for his commitment, dedication and selfless service to the nation.

He said the late President's commitment to peace in the country was a unique attribute that earned him the accolade "Asomdweehene".

Mr Mahama urged Ghanaians to reflect on Prof. Mills’s hard work and principles and strive to live by them.

That, he said, was important because the country had been plunged into an era "when its commitment as a nation to fairness and transparency in governance is wavering”.

He pledged the support of the NDC towards ensuring the proper maintenance of the Asomdwee Park to maintain and preserve the legacy of the late Prof. Mills who, he said, diligently served his motherland.

For his part, Mr Ofosu Ampofo said the party was also putting appropriate measures in place to ensure that the Atta Mills Memorial Library in Cape Coast in the Central Region became fully functional.

Recounting some fond memories of the late President, an elder of the NDC, Prof. Kwamena Ahwoi, described him as a visionary leader whose calm and composed demeanour was his strongest attribute.

"Many people described the late President as a reluctant politician. However, he was the kind of leader that the nation needed,” he said.

A former Minister of State, Ms Sherry Ayitey, also lauded the late Prof. Mills for his distinct political ideology which was premised on the fact that power resided in the people.

“In living up to that ideology, Prof. Mills did everything to heed to the demands of those he served,” she added, saying that made his political career successful.

On July 24, 2012, shock waves ran through the nation when the news broke that Prof. Mills, who was three years, six months into his four-year tenure of office, had died at the 37 Military Hospital.

His remains were buried at the Asomdwee Park, near the Christianborg Castle at Osu in Accra.

The park was later reported to be in ruins and that attracted concern, particularly from the late President’s family, who threatened to exhume the remains for reburial at his home town of Otuam in the Central Region.

At yesterday’s ceremony, however, the Daily Graphic observed that some rehabilitation works had been done on the park, which had been painted and the overgrown weeds cleared.

The place had also been kept clean and neat.