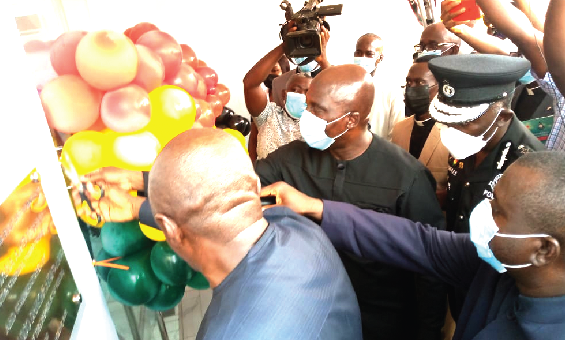 Mr. Ambrose Dery (left), Minister for the Interior, being assisted by Mr. Samuel Amo Tobbin (2nd from left), Chief Executive Officer of the Tobinco Group of Companies, to unveil a plaque to inaugurate the two-storey building to serve as the headquarters for the Police Professional and Standards Bureau. Behind them is Dr. George Akuffo Dampare, the IGP.
30.5k Shares

A two-storey building to serve as the headquarters of the Police Professional and Standards Bureau (PPSB) has been inaugurated in Accra.

The construction and furnishing of the building, valued at about GH¢3.9 million, was financed by the Executive Chairman of the Tobinco Group of Companies, Mr. Samuel Amo Tobbin.

It is located on the compound of the Nima Divisional Police Command and was constructed by Toblues Properties Limited, a subsidiary of the Tobinco Group.

The Minister for the Interior, Mr. Ambrose Dery, inaugurated the edifice on behalf of President Nana Addo Dankwa Akufo-Addo yesterday.

President Akufo-Addo, in a speech read on his behalf by the minister, commended Mr. Tobin for the gesture, saying it exhibited the qualities of a private entity that was not only out to make profit from the public but also ready to give back to society.

He said at a point in the history of the Police Service, the public had numerous complaints about the service, with some asking: “Who polices the police?”

To address the concerns of the public, he said, an Inspection Unit was established to monitor and ensure that police personnel were professional and ethical in the discharge of their duties.

The unit later became known as the Police Intelligence and Professional Standards (PIPS) bureau and now the PPSB.

Over the years, President Akufo-Addo said, the bureau had been reactive, rather than proactive, in its operations, as it relied solely on receiving complaints from the public, investigating same and advising the Police Administration for further action.

In relation to its geographical coverage, he said the bureau had mainly operated in Accra and recently expanded to the Volta, Ashanti and Western regions, denying the other regions the opportunity to hold the police accountable and limiting their ability to bring complaints against defaulting personnel.

The President announced that the Police Administration, under the leadership of the Inspector General of Police (IGP), Dr. George Akuffo Dampare, had redefined and initiated strategies to make the PPSB more proactive in ensuring professional standards within the service, prevent instances of unprofessionalism and reduce instances of personnel misconduct.

The initiatives included a decentralisation programme leading to the establishment of regional PPSBs across all 18 police administrative regions to bring the bureau to the doorstep of the public, he said.

They also included the setting up of a complaint reporting hotline for the public who felt aggrieved during any engagement with the police to call and seek redress in real time, he added.

Another measure, the President said, was the establishment of a Police Body-worn Cameras Monitoring Centre to provide 24-hour monitoring of personnel who would be required to wear the cameras during their duty tour.

He said the government had initiated processes for securing 20,000 initial body cameras to be worn by policemen while on duty and help monitor their activities.

Also, he said, a WhatsApp number had been activated for members of the public to send video footages of police conduct, both good and bad, for investigation and commendation, as the case might be.

“For the Police Service to become a world-class institution, its personnel must deliver their services in a professional and ethical manner,” he said.

The IGP, Dr. Dampare, commended individuals, groups and corporate bodies for complementing resources from the government, which had been unprecedented under the current government.

He said while the government continued to provide the needed resources for the police, the public must support it to ensure that the Police Service was well resourced to maintain law and order.

He said as the Police Administration put in place measures to deal with unprofessional acts of policemen, it would require the support of the public to succeed.

Dr. Dampare appealed to the public to make land available for the putting up of police stations to promote security.

According to him, the most important commodity in the socioeconomic development of every country was security, which must not be relegated to the background and called on custodians to “make land available for us to build police stations to protect you”.

The IGP said there were instances of land meant for developmental purposes in most parts of the country being used for commercial or private purposes, saying: “And nobody will factor in the need to reserve a place for constructing police stations for the maintenance of order and peace.”

Mr. Amo Tobbin, in a speech read on his behalf, said the support would help a professional police service which was key to maintaining law and order in the country.

“A professional police officer relates better with the citizenry, making policing quite easy,” he said.

He added that the emerging threats of terrorism and instability in some of Ghana's neighbouring countries required that Ghana equipped and resourced its security agencies to preserve its territorial integrity.

That, he explained, was because the threats had the potential of negatively affecting Ghana’s local economy.

The Samuel Amo Tobbin (SAT) Foundation, he said, had, over the years, supported the vulnerable in many diverse ways.