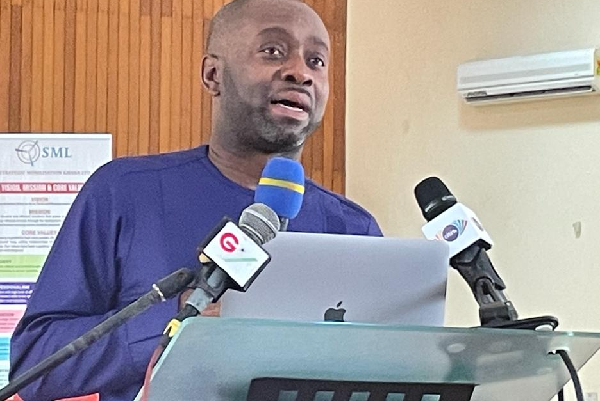 The Chief Executive Officer (CEO) of the Minerals Income Investment Fund (MIIF), Edward Nana Yaw Koranteng, has warned that the country risks importing stones and chippings from neighbouring countries if the rapid encroachment on quarry lands is not stopped.

Encroachment on quarry lands has occasioned many casualties and even some deaths traceable to the activity of blasting.

After assessing the enormity of how settlements spring up within 500 metres of quarries, Mr Koranteng said if nothing was done now, there could be no doubt that within 15 years, the quarries in operation in Ghana could not support the construction and infrastructure requirements of the country.

“We are faced with an existential threat to the quarry industry. The problem of encroachment is incurably bad. If we do not do something about it today, there can be no doubt that within 15 years, the quarries in operation in Ghana cannot support the construction and infrastructure requirements of the country.

“We may then have to import stones from Togo, Burkina Faso or Cote d’Ivoire in order to support our fast-paced infrastructural development,” Mr Koranteng said last Friday after touring quarry sites and interacting with operators in the Western and the Ashanti regions.

Many quarries in the Ashanti and the Western regions had completely folded up because of land encroachment, according to records of the MIIF.

Similar encroachments are happening in the Greater Accra Region such as the Shai Hills, near Afienya, Amasaman and Pokuase, and in the Central Region, such as Gomoa Buduburam, Kasoa and Bawjiase, all stopping operations because settlements are located within the 500-metre radius.

The CEO further said research by MIIF projected the potential of royalties from the quarry sector at GH¢100 million a year, but until recently receipts from quarry royalties were around GH¢3.5 million.

He explained that encroachment by settlers and other issues might affect the royalties potential if nothing was done about the threat.

He also indicated to the quarry association that his outfit was coming up with funding strategies to support the sector for it to expand and be more efficient in its operations.

Mr Koranteng said MIIF was also designing a de-risking mechanism with banks and insurance companies to support the provision of credit for the quarry sector.

“We are looking at the possibility of underwriting a percentage of loans to quarry companies which will seek credit from banks or risk participations with banks in the provision of loan facilities for the sector.

“This will naturally be subject to a set risk acceptance criteria, including proof of payment of royalties,” he explained.

He advised captains of the sector to look at the possibilities of joint ventures in bidding for major jobs, such as railway construction.

The task force and the framework, which were initiated in December 2021, Mr Koranteng explained, allowed MIIF to ascertain production levels and facilitate communication with all stakeholders, with reports on exact royalties from each quarry.

“This initiative has seen an increase in quarry royalties and other non-gold minerals by 100 per cent within the period, with sand winners paying royalties for the first time since the inception of MIIF,” the CEO stated.

The Chairman of the Northern Quarries Association, Adu Tutu Gyamfi, said “people have died and houses have collapsed because of blasting.”

The chairman of the umbrella body of quarry operators in the northern half of the country said by law, the operators had to stop blasting once people encroached on quarry lands to avoid deaths.

“Without blasting, we have to close down. Sadly, many of our members have had to shut down operations because of encroachment,” he said.

According to MIIF, shutting down operations had several consequences for the country.

He said granite from the quarries was used in road, rail and building construction, for which reason it was an essential industrial mineral whose royalties MIIF received on behalf of the state.

Aside from job losses and capital investments going bad when quarries were closed down, he said, the real threat was the importation of stones from our West African neighbours, which would increase the cost of infrastructural development.

A Deputy Minister of Lands and Natural Resources in charge of Mines and Board Member of MIIF, George Mireku Duker, has vowed to lead an onslaught against encroachers, so the quarry business can be preserved.

“If an assembly wants to build schools and you encroach, how do we resolve that? Where are they going to get the stones? Let’s come together as an association and a country to protect and prevent encroachment on these concessions,” Mr Duker, who is also the Member of Parliament for Tarkwa Nsuaem, recently charged.

The sector recorded growth rates of 1.3 per cent and negative 4.3 per cent in the first and the second quarters, respectively, last year.