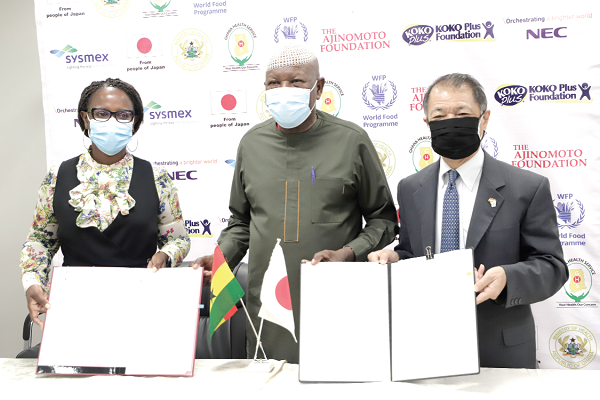 A Memorandum of understanding (MoU) has been signed between the government and Japan to provide quality health care for people in 90 districts in the country.

A Deputy Minister of Health, Alhaji Mahama Asei Seini, signed on behalf of the government, while the Japanese Ambassador to Ghana, Mr Tsutomu Himeno, signed for his country at a ceremony in Accra yesterday.

Dubbed: “Project for universal nutrition and health coverage through a sustainable system for nutrition improvement”, the five-year programme will focus on the provision and marketing of nutritious foods and micronutrient supplements, livelihood initiatives, diagnostic services and social behavioural change communication.

Japanese private organisations, KOKO Plus Foundation, NEC and Sysmex, are to partner the MoH for the implementation of the project.

The MoU was signed to kick-start the project.

Mr Himeno explained that the intervention was as a result of the strong ties between Ghana and Japan, which he said had lasted many years.

“We have a very cordial relationship with Ghana and we always want to support the country in all aspects, especially in health,” he added.

The Ambassador said health and nutrition were vital to human security and, therefore, the onus lay on every government to ensure they were accessible to the people at all times.

He expressed the confidence that the project would be implemented successfully for the benefit of the vulnerable in beneficiary districts.

Alhaji Seini expressed appreciation to the government and the people of Japan for their support to the country, especially in the health sector, over the years.

He mentioned some of the areas that had received support to include maternal and child health and nutrition services, mother-to-child transmission of HIV, capacity building of health personnel, non-communicable disease prevention initiatives and designing and roll-out of maternal and child health record book (MCHRB) which, he said, had helped to improve health and nutrition outcomes in the country.

For her part, the representative and officer in charge of the WFP, Ms Anna Mukiibi-Bunnya, said the social and behavioural change communication project was critical.

She said more than 200,000 people would receive nutrition education and counseling and also provided with opportunities to buy quality food to boost child growth and development.

“This component will enable the under-served group to obtain nutritious food during critical stages of their lives, such as childhood, adolescence, pregnancy and breast-feeding stages,” Ms Mukiibi-Bunnya added.

She too commended Japan for its continued support for nutrition programmes in Africa through the Tokyo International Conference on African Development (TICAD).