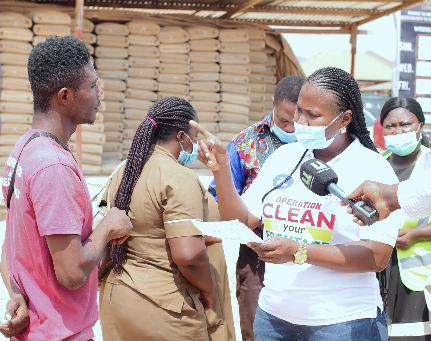 The Municipal Chief Executive for the Ga East Municipality (GEMA), Ms. Elizabeth Kaakie Mann, has tasked residents of the municipality to rekindle their communal spirit and ensure that their environments are clean.

“The time has come for us all to recommit ourselves towards national development and this initiative has come to address the sanitation situation,” he added.

Ms. Mann gave the charge at Abokobi last Tuesday at the launch of “Operation Clean Your Frontage” for the Ga East Municipal Assembly.

The Ga East Assembly has formed a special task force known as the “Saman Saman,” made up of the Environmental Health Unit, Municipal Guards and National Service personnel to ensure strict adherence to the sanitation bye-laws by the residents.

The task force, together with the MCE and assembly members, went on an inspection after the launch of the initiative.

The campaign is geared towards creating awareness of sanitation bye-laws meant to combat the issue of dirty environments.

Ms. Mann commended the initiative by the Regional Minister to deal with sanitation problems and make the region clean in realisation of the President’s vision to make Accra the cleanest city in Africa.

The MCE said her assembly over the past two months had undertaken public sensitisation activities such as its engagement with stakeholders like market women, transport unions, traditional authorities, among others, to educate the citizenry on the enforcement of the initiative.

As part of efforts to strengthen the initiative, the assembly received a new compactor from the Regional Coordinating Council (RCC) through Zoomlion Ghana Limited to ensure the initiative sustainability and needed impact.

The task force summoned 17 residents and workers in the Abokobi municipality for diverse sanitary offences such as leaving choked gutters and bushy surroundings uncleared.

The Head of Sanitation and Public Health in the Ga East Municipality, Mr. Charles Asabre, stated that the summons would serve as a deterrent to other residents to show that cleaning the environment was a collective effort and not that of the government alone.