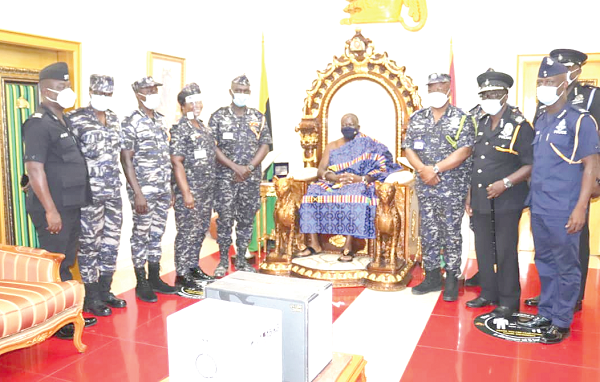 The Asantehene, Otumfuo Osei Tutu II, has asked the Ghana Police Service to take steps to resolve some of the security challenges facing the country to restore public confidence in the service.

He said Ghana had, in recent times, recorded some violent crimes, including highway robberies, and made reference to the killing of the Member of Parliament for Mfantseman, stressing that some of those acts which remained unresolved had the tendency to reduce public confidence in the service.

The Asantehene made the call when the Inspector General of Police (IGP), Mr James Oppong Boanuh, paid a courtesy call on him at Manhyia yesterday as part of his working tour of the Ashanti Region.

Otumfuo Osei Tutu also made reference to a recent report by the Commission on Small Arms and Light Ammunition on the rise in illegal arms in the system as an indication of the lack of trust in the service, hence the decision by people to arm themselves as a means of protection.

He said all those were challenges to the service and charged the police to use their training to resolve those crimes and win back the confidence of the public.

According to him, Ghanaian policemen were among the best on the continent and asked them to put their training to use to be able to bring the perpetrators of heinous crimes to book.

He said the role of the police in ensuring peace during the upcoming elections would also be very critical and appealed to them to live above reproach and dispense their responsibilities professionally.

The Asantehene also called on the public, especially the political parties, to give the police the necessary support and respect to enable them to discharge their duties.

He said the service being a human institution, there surely would be some bad lots among them, but that notwithstanding, the service had, in general, performed creditably to ensure peace in the country.

Otumfuo Osei Tutu also advised the youth not to allow themselves to be used by politicians to foment trouble during the elections.

He said most politicians would not allow their children to lead those disturbances and so asked the youth to also preserve their lives and steer clear of violence.

He stressed the need for everyone to be reminded about the fact that Ghana was the only country for Ghanaians, and that there would be nowhere for the citizenry to go if a conflict arose and they were displaced.

He also reminded politicians that every government had a four-year term in office and that after that term, new elections would be held, “so if you don’t win this year, wait for the next election, and if you have a problem with the results, the courts are there for you to seek redress”.

Mr Oppong-Boanuh briefed Otumfuo Osei Tutu on his mission to the Ashanti Region, explaining that it was to ascertain the operational readiness of the personnel of the Police Service in the region towards the December elections.

He said it was also to have the chance to appeal to chiefs to speak to the youth against violence.

He said chiefs played a very important role in the governance system of the country, as people resorted to them in cases of conflict.

“Unlike other countries, Ghana is blessed to have a chieftaincy institution which is revered by all and consulted when the courts are unable to resolve some of the issues,” he indicated.

The IGP appealed to chiefs to continue to play their role as umpires in the political dispensation of the country.

Mr Oppong-Boanuh assured the chiefs and the people of the Ashanti Region of the commitment of the Police Service to guard the ballot during the elections.

He said the service had identified some flash points in the region and would ensure that security in those areas was beefed up during the elections.