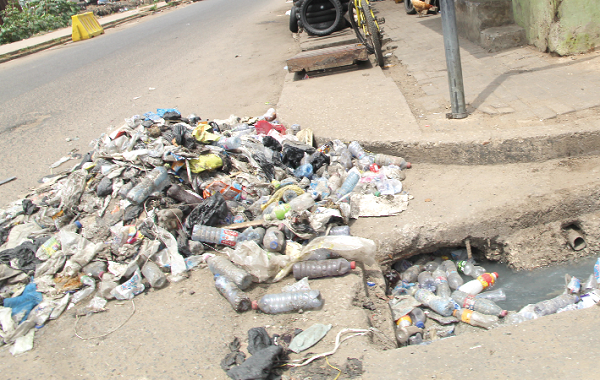 A drain choked with plastic waste near Odawna market in Accra
30.5k Shares

In spite of the disinfection and mass cleanups in the country’s markets in the wake of the COVID-19 outbreak, filth is returning to the markets.

A visit to a number of the markets in the Accra metropolis revealed that sections of the markets had piles of refuse accompanied by pungent smell and multitudes of flies.

At the Kaneshie and Dansoman markets, the environment was fairly clean, with pockets of sanitary challenges.

Despite the challenges in the markets, intense trading activities were taking place.

The situation was, however, moderate at the Kaneshie and the Dansoman markets, which were much cleaner, except for patches of filth here and there.

As it were, all gutters in the markets are choked to the brim with plastic waste.

The CMB and the Makola markets were the dirtiest, with traders having to sit and conduct business in an atmosphere of strong and very unpleasant smell from the garbage heaps close by.

Some traders the Daily Graphic spoke to complained about poor sanitation in the markets.

The dumpsite at the Mallam Atta Market, for instance, is just a stone’s throw from the centre of trading activities, making it extremely difficult for traders to escape the fetid smell they meet at the beginning and the end of each working day.

It is not only the traders at the Mallam Atta Market who find themselves in such an unpleasant circumstance; residents nearby also have to contend with the swarm of houseflies that invade their homes, offices and shops.

Residents of Adabraka Sahara and surrounding areas near the Odawna Market said they had to contend with the unpleasant situation on a daily basis.

Some of them who spoke to the Daily Graphic said all efforts they had made to get the Korley Klottey Municipal Assembly to clear gutters in the community had fallen on deaf ears.

A shop owner, Mr Kwaku Asamoah, said the community organised communal labour from time to time, mainly to clear the gutters, but their worry was that the filth that was removed was left standing and not collected, which eventually found its way back into the gutters.

It is not only markets in Accra that are dirty; the shoulders of roads in some parts of the city are dirty too.

An example is the Graphic Road, where some rubbish has been gathered on the pedestrian lane opposite Accra Brewery, forcing pedestrians to use the main road. 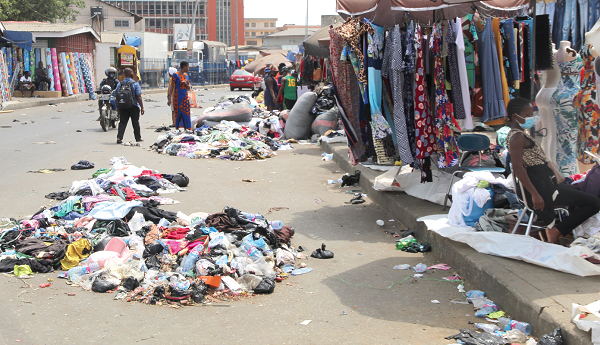 The filth at the Kantamanto Market in Accra. Pictures: ESTHER ADJEI

Checks at the Accra Metropolitan Assembly (AMA) indicated that the assembly was aware of the filth in the markets and was taking steps to have it cleared.

The Public Relations Officer ( PRO) at the AMA, Mr Gilbert Ankrah, told the Daily Graphic that a waste collection team cleared refuse at the CMB and the Makola markets and refuse found on the road shoulders at the end of each work day.

He said waste management teams cleaned the markets each day before trading commenced.

At the Korley Klottey Municipal Assembly, the PRO, Nii Ofori Kwei, said the filth at the Adabraka Market and surrounding areas was being addressed.

He said the assembly had put in place measures to clear the rubbish to bring relief to both traders and residents.

Nii Kwei advised market women to always endeavour to keep their surroundings clean as best they could.

“The assembly is aware of the poor sanitation situation in the market and its surrounding areas and measures are being put in place to correct the mess.

However, traders and others within the market environment must help the assembly to cut down filth that is generated, since cleanliness has become very essential at this crucial time of the COVID-19 pandemic,” he said.