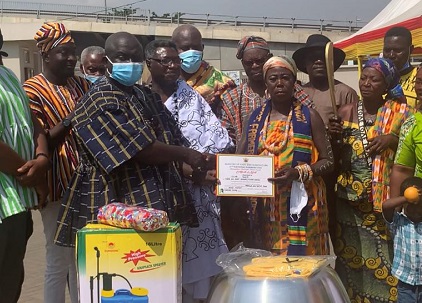 At the ceremony to mark the assembly’s second farmers’ day celebration in Accra today, the hardworking fishmonger was presented with an outboard motor sea bed (side gear), a wax print, four aluminium pans and knapsack sprayer.

Ms. Quaye is said to ply her trade in places like Apam, Sekondi, Elmina and as far as Togo and has 20years experience in the fish business.

She was awarded due the hygienic way she operates and handles her fish business.

Ms. Quaye thanked the assembly for the recognition and urged women in the fish business to work hard and have faith in themselves in order to succeed in the business.

Awards were also given to the best market and best worker from the agricultural department of the municipal assembly for their contribution to agriculture within the municipality.

The 2021 Farmers’ day celebration was on the theme “Planting for Food and jobs-consolidating food systems in Ghana”.

Some food items on display at the ceremony

Meanwhile, 18-year old Abraham Amu, a young rabbit farmer, who won the best youth farmer, has urged the youth to venture into agriculture as their source of livelihood.

Mr. Amu is said to operate his business in Osu and has five years experience in rabbit production. He currently has forty rabbits.

After receiving the items, Mr. Amu thanked the assembly for the recognition and expressed the hope to expand his business.

Speaking at the event, Municipal Chief Executive of KoKMA, Mr. Samuel Nii Adjei Tawiah, congratulated all farmers and fishermen for contributing in diverse ways to feeding the population and sustaining the economy.

He said the assembly on its part has put in place measures to support farmers and fisher folks within the municipality.

"We have so far subsidised six outboard motors for fishermen and we hope to increase the number in the coming years. The assembly's effort to ensuring that food produced from our farmers are properly secured, the markets in the Municipality are in the process of being redeveloped on Public Private Partnership basis,” he said.

He added that the construction of a fish market by the assembly will also improve the livelihood of the people of Osu, particularly, those in the fish industry.