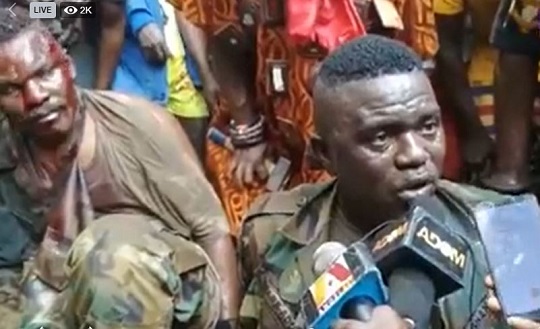 A number of soldiers who descended on Dome-Faase, a community near Kasoa where two suspected soldiers had been brutally assaulted by residents have vacated the area.

Their departure Thursday, follows a meeting between the Municipal Chief Executive (MCE) of the Ga South Municipal Assembly, Mr. Joseph Stephen Nyarni and the leadership of the soldiers deployed to the area.

The assaulted soldiers were said to have been deployed to the community to protect a parcel of land which a chief was claiming ownership of, but led to a clash between the soldiers and residents.

According to a report by Accra based Joy FM, the soldiers left the area on Thursday afternoon, after retrieving all guns seized by the community members during the clash.

The heavy presence of the military after the attack on the two soldiers caused young men to flee from the community, leaving behind women, children and the aged.

The other few people seen in the community were health workers. A number of young men from the community were also arrested to assist with investigation, according to the Deputy Minister for Defence, Major Derrick Oduro (Rtd), who is also MP for Nkoranza North.

However, an Administrator of the Obom Health Centre, Mr. Adams Adramani expressed worry over the presence of the military saying that most of the health workers have refused to show up for work.

Meanwhile, Security Analyst, Adam Bonaa called on the military high command to investigate the matter thoroughly as it did not appear that the soldiers were on a legitimate assignment.

"I would want to believe that proper investigation will be put in place so that at the end of the day, whoever this commanding officer’s name is will be brought to book because as far as I’m concerned, this doesn't look like a sanctioned military operation because military officers are not supposed to protect land especially land that doesn’t belong to them."

A day after the attack on the soldiers, most of the men in the town fled as soldiers stormed the area.

Reports from the communities indicated that the soldiers went house to house and arrested residents in a swoop from about 30 communities.

Most of the people arrested were believed to be leaders of the community who had allegedly incited the youth of the area to beat up the soldiers on Tuesday in the humiliating manner.

TheGhanareport said between 200 to 600 soldiers were deployed in a swift and emergency move with about two choppers hovering around the vicinity.

The two assaulted soldiers have since been conveyed to the 37 Military Hospital for treatment.