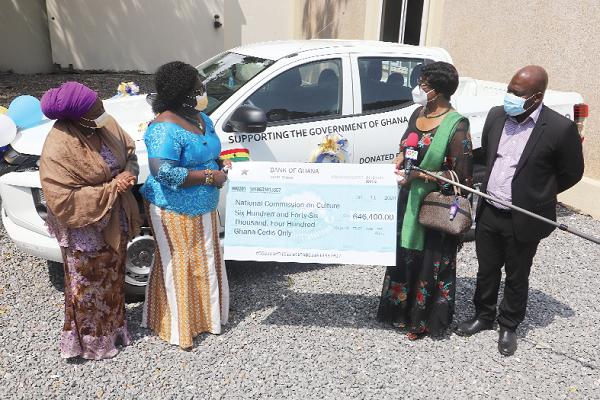 The National COVID-19 Trust Fund has presented GH¢646,400 and a double-cabin pick-up to the National Commission on Culture (NCC) to enable it to sensitise the public to the COVID-19 pandemic.

The Chairperson of the Board of Trustees of the fund, Justice Sophia Akuffo, said the trustees saw the need to extend support to the NCC because it was a body set up to maintain the unique cultural identity and values of the country.

She said the commission’s work was towards the promotion of an integrated national culture, as well as contribute to the economic development of the country.

"Re-tooling the commission is a sure way of equipping it with the needed logistics and equipment to enable it to reach out to the various communities, especially in the rural areas, with information to combat the pandemic,” Justice Akuffo said at the presentation ceremony in Accra last Thursday.

She added that the fund had established a partnership with both public and private organisations which had increased efforts at fighting against the pandemic.

Justice Akuffo named some of the organisations as the National Commission for Civic Education (NCCE) and the Ghana Medical Association (GMA).

Justice Akuffo said over GH¢57 million had been received as of the end of November this year, with about GH¢8 million worth of items in kind.

Others were ambulances, saloon cars and pick-up vehicles.

Justice Akuffo said about 200 hospitals, care management, testing, isolation and health centres and CHPS compounds across the 16 regions had been supported.

She indicated that financial support had been given to the Ghana Health Service and other testing centres to acquire reagents to boost testing for the disease.

The board of trustees chairperson appealed to Ghanaians, especially during the Christmas festivities, to “stop the handshakes and hugging till the pandemic is ultimately dealt with”.

She said if care was not taken and a second wave occurred, it might be devastating, hence the need to be serious about observing the safety protocols.

Justice Akuffo noted that some non-governmental organisations (NGOs) had assisted the fund in the area of education and information dissemination programmes on the pandemic in the various communities across the country.

The messages, she said, bordered mainly on strict adherence to the prevention and safety protocols, such as regular washing of hands under running water, the use of hand sanitiser and social distancing.

The Executive Director of the National Commission on Culture, Mrs Elizabeth Nyame, said the support had come at the right time, especially when the country was looking to calm nerves after the 2020 general election.

She said the support would augment the efforts of the commission and position it well to educate Ghanaians on the need to refrain from acts that would cause disunity, confusion and troubles.

Mrs Nyame said since the pandemic was still around, the commission would use the support from the trust fund to spread the news about the consequences for ignoring the safety measures.

The executive director disclosed that the commission would roll out a system in six regions, namely, Greater Accra, Central, Western, Volta, Bono and Eastern, to educate the populace through culture.