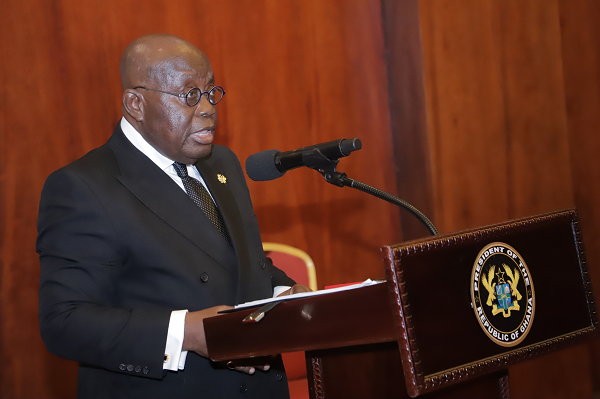 President Nana Addo Dankwa Akufo-Addo has said in the face of the global economic challenges, with their impact on the country, the government has taken difficult but necessary decisions to bring the economy on track.

He said details of the decisions would be announced on Thursday, saying “the times call for difficult decisions”.

“I don't think that there's anybody in Ghana who would expect today that things can be just so easily resolved as they are. Some of them are due to the way the world economy is working and its impact on us,” the President stressed.

President Akufo-Addo made the announcement when the Chairman and members of the Council of State conferred with him at the Jubilee House in Accra yesterday as part of the council’s routine interactions with the President.

After opening remarks by the Chairman of the council, Nana Otuo Siriboe, and a response by the President, the meeting moved into camera.

President Akufo-Addo assured the council that the Finance Minister would brief the members during the closed-door meeting.

He announced that after the usual quarterly Cabinet retreat which was held last week, it was decided that the Minister of Finance should brief the nation on the specific measures the government had taken to put the ship of state on a better keel.

“It is no secret that our economy is going through difficult times. It is also no secret that we are not alone in this exercise. Many of the phenomena that we are facing are apparent in many other parts of the world as well. But that doesn't mean that the government is impotent in trying to find solutions,” the President said.

He referred to the three-day retreat by the Cabinet at Peduase last week as “quite timely because, as a general rule, we have four retreats every year on a quarterly basis and this is the first one for this year”.

The President said fortunately, the retreat coincided with the difficulties, and that with the public anxiety over the way the economy was going, it offered the government the opportunity over three days to look in-depth about where the economy was headed and what measures were necessary to be taken.

He said some aspects of the decisions had been announced by the Bank of Ghana, but indicated the decision was that the Minister of Finance, on his (President’s) instructions, was going to have a major engagement with the nation tomorrow.

He said the minister would then be in a position to lay out, specifically, the measures the government had taken and intended to take to put the state on a better keel.

Commenting on the decision of the Council of State to reduce members’ allowances by 20 per cent, President Akufo-Addo described the gesture as an exciting move.

“I am happy about the decision you have made to join the effort that we all have to make to downsize the expenditure size of our public finances and I'm grateful for the act of solidarity on the part of the council for doing the same thing,” he added.

The Chairman of the Council of State, who took the floor to speak first, said in tandem with the decision of the Executive to reduce the salaries of members by 30 per cent for the rest of the year, “the council has also decided that we will reduce our monthly allowances by 20 per cent until the end of this year”.

That, he explained, would be its widow's mite towards efforts at economic recovery and expressed the hope that the gesture would be emulated by other organs of state.

He indicated that over the past few weeks, the council had been deliberating on current economic conditions and had been collecting views, with the intention to share them with the President as early as possible.

Nana Otuo Siriboe said while going through routine consultations, the council heard that the President and his Cabinet were going for a retreat over the same issues.

He explained that snippets of the decisions taken at the retreat were in tandem with the suggestions they were going to make to the President.

He expressed the confidence of the council in the President’s ability to overcome the current economic challenges and put the smiles back on the faces of Ghanaians.