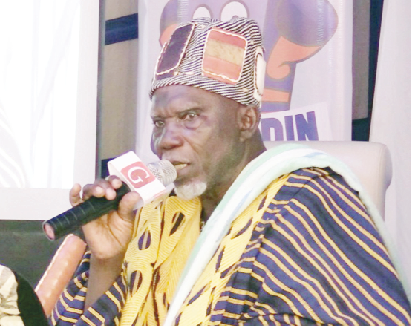 Naa Ziblim Abdullai, Chief of Lamashegu, speaking at the event

The Chief of Lamashegu in Tamale, Naa Ziblim Abdulai, has called for effective collaboration among various stakeholders in the sanitation sector to address the sanitation challenges facing the country.

He said effective collaboration was key to address the menace because it was a national challenge, and that demanding accountability from only the government would not yield the desired results.

He also called on assembly members to champion sanitation issues in their respective electoral areas by sensitising residents to their civic responsibility of keeping their environment clean and avoiding littering.

Naa Abdulai made the call at the Graphic/Zoomlion Sanitation Dialogue series in Tamale, the Northern Regional capital, yesterday.

It was on the theme: “Keep Ghana clean”.

The dialogue is an initiative to sensitise the public to their civic responsibility of keeping the environment clean, as well as proffer suggestions on how to address the sanitation challenges of the country.

Panellists at the dialogue included representatives of the Regional Health Directorate, Zoomlion Ghana, the Metropolitan Chief Executive and the traditional council.

A section of the public and some representatives of civil society organisations (CSOs) and religious bodies also participated in the dialogue through an open forum segment.

Naa Abdulai, who chaired the dialogue, emphasised the need to re-introduce the sanitary inspection concept, popularly known as ‘sama sama’, to crack down on sanitation offenders and whip up public interest in sanitation.

“In those days when the ‘sama sama’ concept was effective, you saw the officers in the various communities every day carrying out inspection and people kept their environment clean. But these days we don’t see them again; I think they should be re-introduced to help enforce existing sanitation bye-laws,” he said.

Having declared 2021 the “Year of Sanitation”, he said, the company and its partners were focusing on efforts to whip up the citizenry to adhere to good sanitation habits and practices.

“We are satisfied that the national exercise has received backing from our metropolitan, municipal and district assemblies (MMDAs) to enforce sanitation regulations aimed at keeping the environment clean,” he noted.

Mr. Asmah further observed that the Tamale metropolis was one of the fastest developing cities in the country but issues of inadequate toilet facilities for both domestic and public use, lack of drainage systems, the indiscriminate dumping of refuse, among other sanitation challenges, were fast eroding the gains made over the years.

He, therefore, called on all and sundry to keep their environment clean, saying: “Everyone has a responsibility to clean the environment; as has been said many times, when it comes to sanitation, it is not one-sided; it’s everybody’s matter.”

The Senior Communications Officer at Zoomlion, Adams Mohammed Mahama, said as the leading waste management company in Ghana and Africa, Zoomlion’s collaboration with Graphic would carry more awareness creation to enlighten the people to ensure a clean environment.

He said the waste management company had introduced the one-million bins initiative to position bins at designated centres across the country for waste collection.

He called on MMDAs to strictly enforce sanitation bye-laws to improve on the sanitation situation in their respective areas.

The Chief Pharmacist at the Northern Regional Health Directorate, Dr. Dominic Otchere, for his part, said the impact of sanitation on health was enormous, as about 90 per cent of all Outpatient Department (OPD) cases at the various health centres were sanitation related.

He, therefore, called for attitudinal changes and the strict enforcement of existing sanitation bye-laws to address the situation.