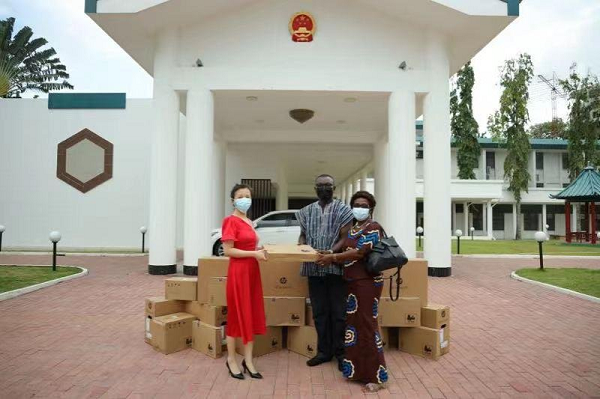 The Chinese Embassy in Accra has donated some digital equipment to the Ghana News Agency (GNA) to facilitate its role of delivering quality information, which aids the building of an inclusive prosperous nation.

Ms Catherine Lou, Director of Political Affairs, who presented the items to the Agency, said the gesture, which followed a request from the Agency, was aimed at strengthening the cooperation between the Embassy and the Ghanaian media.

It was also parts of efforts to build their capacity to serve their nation and the international community effectively.

The Embassy is a traditional supporter of the Agency, providing equipment valued at GH¢50.000 to the Ghana’s only wire service in 2018.

The General Manager of the Ghana News Agency, Mr. Albert Kofi Owusu, on behalf of the Board and Management, thanked the Embassy for the donation and said the equipment would go to support the news agency’s digitization drive.

The Agency has embarked on a process of revamping its newsgathering operations, which include recruitment, training of reporters and editors in the production of digital news content and the acquisition of modern digital equipment to aid speedy transmission of stories from the field.

Mr. Owusu praised the more than two decades of partnership between the Ghana News Agency and Xinhua News Agency and expressed the hope that the two organisations would deepen the relationship through sharing of media development strategies, especially in the post-pandemic era.

He said GNA was poised to be the source of news on Ghana’s investment and industrialization drive, economic and tourism potential through story exchanges with its international partners.

The Agency is also in partnership discussions with the Namibia News Agency under the Nambia-Ghana Joint Permanent Commission of cooperation (JPCC), and the Bulgaria News Agency, among others.

GNA is the second highest contributor of stories to an African network of 25 state news agencies, Atlantic Federation of African Press Agencies, FAAPA, with its headquarters in Rabat, Morocco.

FAAPA affords the Agency a platform for dissemination of authentic news stories from Ghana to the rest of the world.