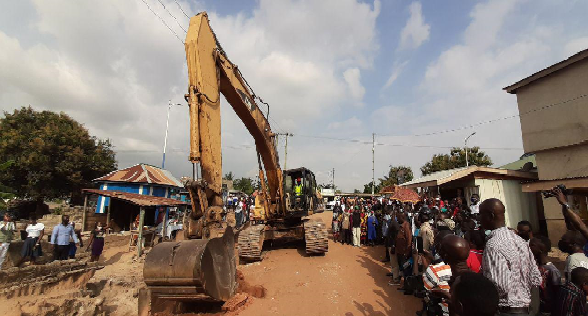 A sod-cutting ceremony has been performed for the construction of 9.5 kilometres of roads in Atimatim and surrounding communities at the Afigya Kwabre District of the Ashanti Region.

The project includes the construction of drains, patching, and tarring works and is expected to be completed within a year.

Roads to be rehabilitated include that from Atimatim New Site to Bronkon, Chairman Junction to Bronkon-Abuakwa, and the Old Atimatim road as well as all other roads that connect to Atimatim.

Speaking at a durbar of chiefs and people of Atimatim last Friday, a Deputy Minister of Energy in charge of Power, Dr. William Owuraku Aidoo, gave an assurance that the government would do everything in its power to ensure that the project was completed on schedule.

He appealed to residents of the communities to cooperate with the contractors who would be working on the project so they would be encouraged to deliver as planned.

Pray for your leaders

Dr. Aidoo, who is also the Member of Parliament (MP) for Afigya Kwabre South, reminded the people to always pray for the leaders of the nation so they would do their best for the people.

He cautioned them not to insult and curse their leaders because they had not been provided with their needs.

He explained that while it was right to demand a share of development projects for communities, delays in their implementation was not a sign of failure on the part of leadership, since it took time to get projects approved and to commence.

No projects, no votes

He expressed his disappointment with threats from some communities that they will not vote in the upcoming general election because development projects envisaged had not been provided, saying it took time from the approval stage to documentation stage and to work stage and, therefore, urged the citizenry to exercise patience when projects delayed.

He appealed to traditional authorities to ensure that all containers and other properties currently found along the roadsides were removed to pave the way for the projects to take off smoothly.

The Chief of Nkwantakese, Nana Boakye Yam, commended the government for the many development projects springing up in the area.