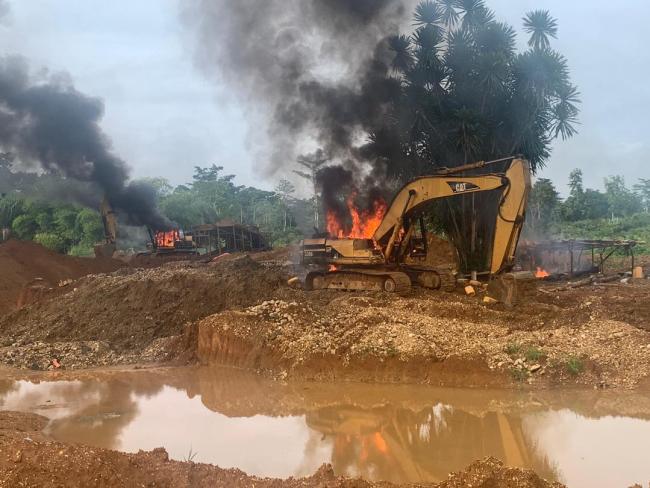 The President of the Small Scale miners Association of Ghana, Michael Peprah has expressed disappointment in President Nana Addo Dankwa Akufo-Addo’s endorsement of the burning of excavators seized from illegal miners.

The president on Wednesday reaffirmed his determination to root out illegal mining and stated that the burning of equipment used for the pollution of water bodies and forest reserves will not cease till the criminal acts are halted.

But speaking on the Accra-based radio station, Starr FM on Thursday (May 27, 2021), Mr Peprah said he was shocked at the comments by President Akufo-Addo.

He said they didn’t expect the president to speak in the manner in which he did, adding that, “When we had a stakeholder meeting with them, they didn’t mention anything about the burning of excavators. I don’t think the President is a lawyer because if he were, he wouldn’t have spoken the way he did. And how dare we make the military appear as judges?

“We shouldn’t embolden the military to go about burning excavators. That’s not how rule of law works in a country… we were not expecting our president to speak like this, honestly”, he stressed.

He added that, “I know there are some who believe that the ongoing exercise of ridding our water bodies and forest zones of harmful equipment and machinery is unlawful and in some cases harsh. I strongly disagree and I will advise those who take a contrary view to go to court to vindicate their position if they so wish. That is what the rule of law is all about?”

Galamsey: We will burn excavators, take us to court - Minister

Burning excavators or not in galamsey fight?