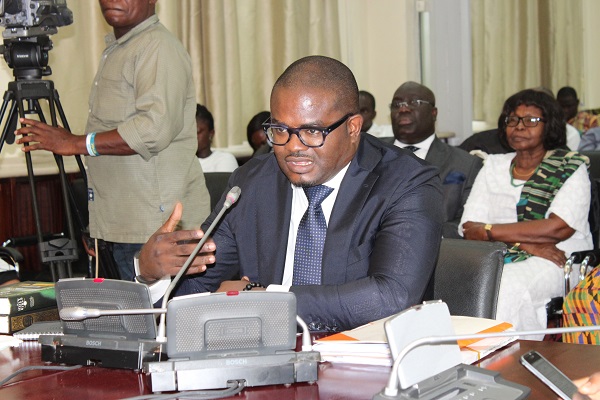 The Minerals Income Investment Fund (MIIF) is racing to float shares of its special purpose vehicle (SPV) on the Ghana and the London stock exchanges before the end of the year.

A Deputy Minister of Finance, Mr Charles Adu Boahen, disclosed this to the Daily Graphic in an interview at Peduase, near Aburi in the Eastern Region last Saturday.

Supported by the Chief Executive Officer of the MIIF and former Member of Parliament for Kumawu, Mr Yaw Baah, Mr Adu Boahen said the government came up with the idea of leveraging the mineral royalties of the country in order to maximise the value from the resource and not allow it to drown in the Consolidated Fund, without tracing what it had been used to do.

He said the company was finalising its prospectus for securities and exchange regulatory approvals before the listing, with the hope of doing it before the elections were held.

Mr Adu Boahen gave an assurance that all details about the transactions, profiles of directors and incorporation costs would be disclosed in the prospectus.

He said the benefits to accrue to the country were many and both tangible and intangible.

They included the dividends from the company’s operations, job creation when it helped to finance mining operations with its parent entity, the MIIF, while it would put the country on the international map as a destination for gold mining, as investors would become more interested in the country, he said.

“We will see a huge uptake in investments in the mining sector in Ghana based on this IPO. This is essentially a marketing cause — you’re selling Ghana to investors, making them aware of the opportunities, and this is how you can get that value — through this IPO,” Mr Adu Boahen said.

The government passed the Minerals Income Investment Fund Act, 2018 (Act 978) with the key objective of maximising the county’s mineral wealth for the benefit of Ghanaians, while ensuring that receiving royalties from gold mining companies is sustainable.

The law was amended a couple of weeks ago to enable it to incorporate subsidiaries and use it as an SPV to do business across the world.
The parliamentary approval also included approvals of four other related agreements among the MIIF, the SPV and other entities with which it would have transactions.

The SPV is Agyapa Royalties Ltd, initially incorporated as Asaase Royalties Ltd, which has been incorporated in a British channel island, Jersey, where it will enjoy tax reliefs on transfer of dividends and other concessions that allow it to retain much of the incomes it generates.

It will later list on the LSE, but the government, through the MIIF, will retain at least 51 per cent, while a subsidiary of Agyapa, ARG Royalties Ltd — to be responsible for channeling the royalties to its parent company — will be listed on the GSE, with the government maintaining a similar shareholding structure.

But many analysts and political figures have criticised the transaction and alleged that it is meant to allow a few individuals to have control over the country’s mineral royalties for personal gain.

Throwing light on some of the benefits the arrangement would yield, Mr Adu Boahen said apart from the physical benefits, such as the proceeds from the transaction, Ghana would have a very transparent entity and vehicle which could be used to raise future investments for financing mining assets across Africa.

He said because of the 100 years of gold mining experience in the country, there was a huge depth of expertise in the sector which had not been leveraged enough.

“There is a huge depth of expertise in the mining sector but we have not been able to internationalise or leverage that expertise and knowledge to capitalise on other opportunities across the continent,” he said.

For instance, he said, Ghana’s universities had produced many geologists whose expertise could be used to prospect for or assess mining assets across the continent where Agyapa could take advantage and invest for more returns.

“By setting up this company, we can hire our own geologists to look at mining assets across Africa, to give us feedback about which one is a good investment and this will enable Ghana to really create a huge entity that has a footprint across Africa,” the Deputy Finance Minister said.

Ghanaians can own shares

On whether ordinary Ghanaians could buy shares of the companies, he said that was essentially the rationale for the dual listing, especially for listing on the Ghanaian bourse.

He said the GSE listing would be a retail IPO, where everybody would be able to buy shares in it through brokers.

Explaining the difference between the Ghana Infrastructure Investment Fund (GIIF) and the latest vehicle, Mr Adu Boahen said the GIIF was a sovereign fund to raise money to invest in infrastructure.

On the other hand, he said, the MIIF was set up to better manage royalties and proceeds from the mining sector that accrued to the state and dividends received from the subsidiary.

He said although the country had been receiving royalties over the years, “we could not pinpoint any particular project that had been the outcome of the royalties, as everything fizzled into the Consolidated Fund”.

“We are hoping that with the establishment of the MIIF, that will change and we will be able to see where our money is going, instead of it disappearing into the Consolidated Fund to be used for general budgetary purposes,” he said.

How it works out

The SPV, incorporated as a private institution, independent of governmental control, will receive the royalties due the state to capitalise the company.

It will then float up to 49 per cent on the LSE to be in the business of financing mining infrastructure and assets in Ghana and across the world.

The Deputy Finance minister also explained that local small-scale mining companies could resort to Agyapa for equity financing to bolster the local mining industry to ensure that Ghanaians were also involved in mining activities.

He said the MIIF would also invest in indigenous mining companies using the proceeds it received from its subsidiaries.