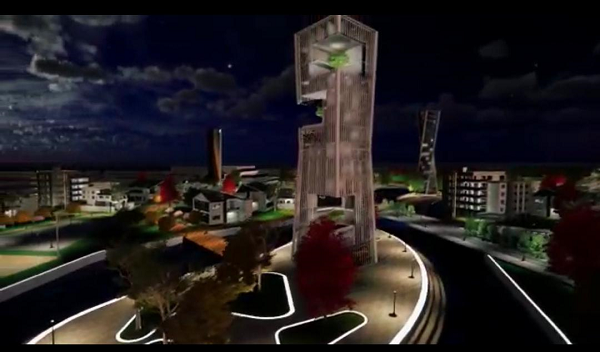 An artist’s impression of the proposed scheme
30.5k Shares

A proposed re-development scheme has been developed for the land on which the demolished Agbogbloshie Market in Accra was situated.

Intended to give the area a facelift, the scheme is yet to be submitted to the seat of government, the Jubilee House, for further suggestions, inputs and approval.

In the meantime, there is a contractor on site erecting a fence to secure the land.

While awaiting approval from the Jubilee House, the contactor, who has already gone through the Public Procurement Authority, has .started digging the foundation for the fence wall.

Throwing light on the proposed re-development, the Greater Accra Regional Minister, Henry Quartey, told the Daily Graphic that the overall plan was to bring immense life to the area.

“We’ve secured a contractor who has moved to site and I am sure that you will see more action any moment from now.

“let me assure all that the fence wall will be completed in six months, and once we agree on the re-development scheme with the various agencies, you’ll see a new Agbogbloshie that we will all be proud of,“ he said.

He said the Regional Coordinating Council (RCC) did not demolish the market just for the sake of it but to ensure that what replaced it fitted into the development plans of Accra.

In the meantime, the regional minister said, a portion of the land had been allocated for an Agenda 111 hospital project.

He disagreed with suggestions in some circles that the redevelopment of Agbogbloshie had delayed.

When the Daily Graphic visited the site yesterday, the contractor had started the fence wall and was busily digging the foundation.

The contractor had also put up offices at the site.

Nonetheless, we saw a vast stretch of land intact and waiting to be developed.

On July 1, 2021, Mr Quartey led security personnel to clear market women and scrap dealers from the Agbogbloshie Market, one of the country’s biggest markets, as part of the ‘Make Accra Work’ initiative.

Many shops and makeshift structures were razed to the ground.

Onion traders there had since been resettled at the Adjen Kotoku Market.

During the exercise, Mr Quartey said no one would be allowed to return to the demolished Agbogbloshie Onion Market.

In a related development, Nana Konadu Agyeman and Elizabeth Konadu-Boakye report that the regional minister yesterday inaugurated the Operation Clean Your Frontage Secretariat in Accra, with an assurance that there would be full implementation of sanitation by-laws that had been passed to keep the city clean.

The secretariat, located at Asylum Down, is aimed at bolstering the government’s campaign to make Accra the cleanest city in Africa.

It will be a one-stop shop for all activities under the campaign and will include a Regional Call Centre, as well as the regional office of the city.

The centre is a centralised office managed by national service persons who will receive direct communication on sanitation-related complaints and reports and relay same to all the 29 assemblies as and when they are received from the public for redress.

Summons
Responding to the frequently made statement by residents of the capital that it was the duty of assemblies to clean communities, Mr Quartey said a by-law had been passed.

Subsequently, he warned that when the city response team “swing into action” next week, it would issue summons to persons who flouted by-laws on sanitation, “and you will pay”.

“If you do not pay, they will take you to court,” he warned.

On the two-week ultimatum given by traders doing business along the Odaw River and at the Kwame Nkrumah Circle and its environs to demonstrate on the streets to register their displeasure with what the RCC was doing, Mr Quartey said he was strongly opposed to the threat by the traders.

“Respectfully, I want to serve them notice that they will not even last one week,” he warned the pay their taxes to enable the government to provide infrastructure, employment and other social interventions for the citizenry.