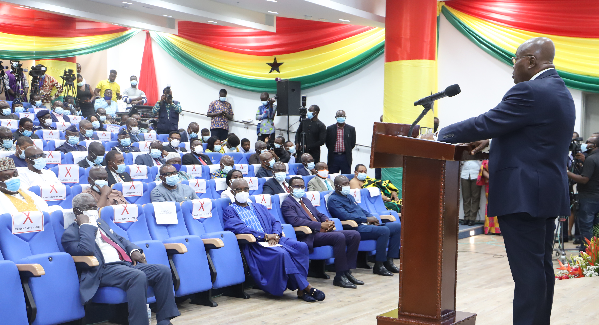 President Nana Addo Dankwa Akufo-Addo has assured the African Union (AU) and the African Continental Free Trade Area (AfCFTA) Secretariat of the continuous support of the government and the people of Ghana for the success of the free trade area initiative.

He has, consequently, called on relevant stakeholders such as ministries, trade and investment promotion agencies, regulatory institutions, and business and development services providers, to work closely towards the common goal of ensuring that AfCFTA becomes a success.

President Akufo-Addo was speaking at a business forum organised by the Ministry of Trade and Industry in collaboration with the Ghana Revenue Authority (GRA).

The forum was christened: “Start of AfCFTA trading in Ghana: Implementation arrangements”.

The President said the government would ensure that Ghanaian businesses derived maximum benefit from the AfCFTA.

“There are good reasons why the AfCFTA must succeed. It is estimated that a single continental African market will increase intra African trade by $35 billion per year by harnessing the purchasing power of 1.2 billion Africans; it will help transform the huge resource endowments in African countries through value addition; it will increase export revenue earnings in Africa; it will promote regional value chains; and it will create massive job opportunities for the youth of Africa,” he stated.

President Akufo-Addo said the government’s strategy for supporting the private sector to export to other African countries underpinned its national action plan for boosting intra African trade and the national export development strategy.

“You can attest that the government’s flagship and priority programmes such as One-district, One-factory (1D1F), Planting for Food and Jobs, the strategic anchor initiatives and the new trade facilitation programmes are designed to transform the Ghanaian economy and position the country as the new manufacturing hub of the region.

“Government is committed to ensuring that adequate financing and human resources are mobilised to make Ghana the new commercial centre for trade financing and investment on the continent,” he added.

The Minister of Trade and Industry, Mr Alan Kyerematen, said the start of trading under the AfCFTA was both the end and the beginning of the journey to establish a single market for the continent.

“But in the same vein, it is also the beginning of the implementation phase of this journey,” he stated.

The Trade Minister said while Africa deserved a pat on the back for coming this far, the celebration must be moderate as there was still a long way to go.

“This is not the first time that our union is embarking on such a major continental initiative. We have had the Comprehensive Africa Agricultural Programme, the Programme for Infrastructural Development in Africa, the Accelerated Infrastructural Industrialisation Development for Africa, the African Peer Review Mechanism and the African Mining Vision.

“All these continental initiatives have had varied degrees of operational success due to implementation challenges that have confronted them, and even in the area of trade and regional integration, we have had the regional economic communities, and these have been in existence for many years, but again with varied degrees of success because of implementation challenges.

“This is not to instil fear in ourselves, but it is appropriate that we sound this caution because of the challenges of implementation.

Fortunately for us on the continent, having been closely associated with the planning process myself, I am confident that this time we shall succeed,” Mr Kyerematen stated.

The Secretary General of the AfCFTA Secretariat, Mr Wamkele Mene, said the start of trading was a step closer to a vision of an integrated Africa where boosting intra African trade and eventually creating a single market was becoming a reality.

Sharing the progress made by the secretariat, he said 54 countries out of 55 had signed the agreement, with 34 countries ratifying it.

Ghana was one of the very first countries to sign and ratify the agreement, he said, adding that the AfCFTA Secretariat sited in the country was not only a symbol of confidence in the country, but also signalled Ghana as the commercial and trade centre of Africa.

“Through the AfCFTA, Ghana and Accra is established as the trade and diplomacy capital of the African continent. I am pleased to inform you that this vision is becoming a reality as during the 13th extraordinary session, the heads of state accepted my recommendation to transfer all functions related to the AfCFTA from Addis Ababa to Ghana under the leadership of the secretariat,” Mr. Mene stated.

That decision, he added, positioned the country as the gateway to trade and investment in Africa, “and gave practical meaning to Ghana’s long-standing ideals of pan Africanism and I’m truly proud to be part of this historic journey”.