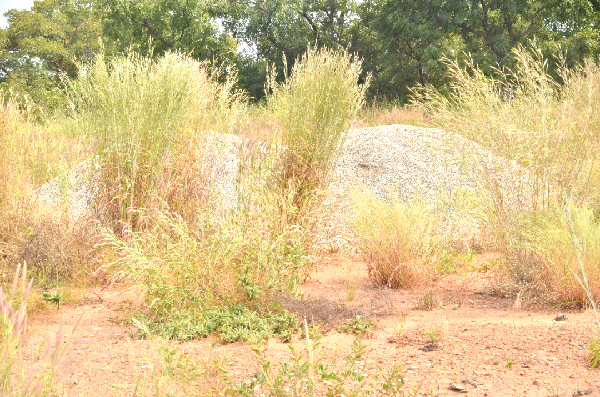 Some chippings left at the site by the project contractors
30.5k Shares

Almost three years after sod was cut for work to begin on the construction of the Pwalugu multi-purpose dam, work on the much touted project is yet to commence.

The project, estimated at $993 million, would be the single largest investment ever made by the government in the northern part of the country to address three main issues namely; provision of water for irrigation, generation of electricity, and control of the annual flooding of communities in the Upper East and North East regions.

It is also expected to control the perennial flooding in the five northern regions caused by heavy rains and the spillage of the Bagre dam in Burkina Faso.

However, the contractor has abandoned the three project sites, compelling the chiefs and people to voice their frustrations and call on the government to address the challenges that have held back the project.

“I wish to urge the government to address all bottlenecks that have delayed the project to enable the contractors to return to the site to begin the actual construction of the project,” the Chief of Kurugu, Naa Adams Sulemana, said in an interview with the Daily Graphic.

Naa Sulemana said the project, once completed, could transform the north, especially in agricultural production, and, therefore, urged the government to do everything to bring it into fruition.

In an effort to impress upon the government to expedite action and release funds towards the construction of the project, the Peasant Farmers Association of Ghana (PFAG) has held a peaceful march through some principal streets of Nalerigu, the capital of the North East Region to press home their demand.

Earlier, there were attempts by the regional police command to stop them from going on with the march but when they were unsuccessful, they declined to give the farmers police protection during the three-hour march held last Thursday, October 27.

Nonetheless, the farmers went ahead with the march and presented a petition to the Overlord of the Mamprugu Traditional Area in the North East Region, Naa Bohagu Abdulai Mahami Sheriga, at his palace for him to add his voice to the several calls on the government towards the execution of the project.

They held placards with various inscriptions such as “irrigation is solution to low agric performance”, “invest in Pwalugu multipurpose project”, “time to take agric serious, irrigation is the way”, “government must invest in irrigation”, “reduce poverty in northern Ghana through agriculture” and “rehabilitate one village one dam projects”, among others.

When the group got to the offices of the Regional Coordinating Council (RCC), there was no official available to receive their petition for onward submission to the Vice-President, Dr Mahamudu Bawumia.

However, in response to the concerns expressed about the delay in the dam project, Dr Bawumia, has  indicated that it is as a result of financial constraints, Daily Graphic’s Northern Region Correspondent, Mohammed Fugu, reported.

Speaking at the launch of the Northern Development Authority five-year strategic plan in Tamale last Wednesday, the Vice-President said the government was determined to find the needed funds to ensure the speedy construction of the dam, to help address the perennial flood situation in the northern part of the country.

In their petition, PFAG members said prioritisation of investment in the Pwalugu multipurpose dam could set the tone for investing in massive irrigation infrastructure in other parts of the country.

They said “given the importance of the multipurpose dam project to the livelihoods of the people within its catchment area, we are calling for dedicated sources of funds for the construction of the dam.”

“The previous budgetary allocation from the government could not be relied on to effectively complete the dam, the reason nothing is currently ongoing on the project,” they indicated.

The project has become necessary due to the annual floods from neighbouring Burkina Faso and its accompanying deaths in communities and areas close to the flow-way of the Bagre dam. 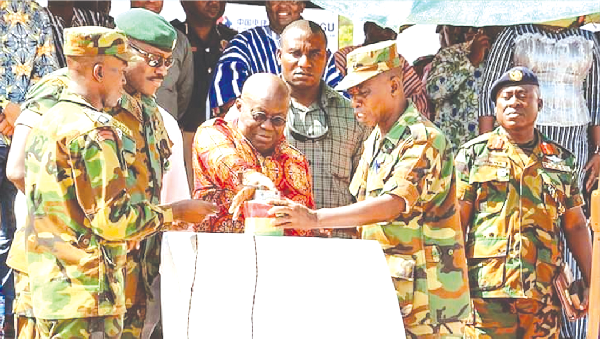 The Executive Director of PFAG, Dr Charles Kwowe Nyaaba, in an interview with the media, expressed disappointment that the police refused to give them protection while no official of the RCC was available to receive their petition.

He noted that the peaceful march was non-partisan, and was only intended to put pressure on the government to devote resources towards the construction of the multipurpose dam, which had been on the drawing board for more than 60 years.

He stated that members of PFAG were very happy when the sod was cut for the commencement of work on the project but they had since realised that the project had stalled for some years now.

“We wish to call on the government to prioritise the construction of the project as the irrigation component would lead to the availability of more water for agricultural purposes,” he said, adding “also, we are calling on the government to pay the required compensation to farmers and resettlement arrangements for community members to pave the way for the project.” 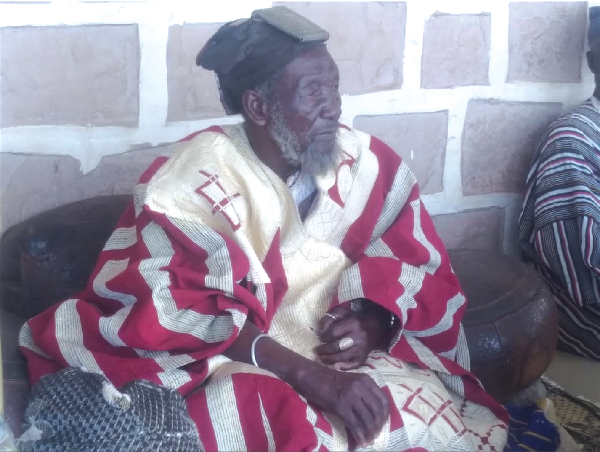 Naa Bohagu Abdulai Mahami Sheriga, the Overlord of the Mamprugu Traditional Area, in his palace

During a visit by the Daily Graphic to the project sites at Kurugu, Gubeo and Sariba, all in the West Mamprusi Municipality in the North East Region where all the components of the project are expected to be constructed, no activity was observed.

The temporary fenced camp site put up by the contractor to pave the way for actual works to begin on the project had been closed down with all heavy duty equipment and other building materials moved out of the site.

Concrete blocks, chippings, gravels and other materials that were initially at the site had all been taken away and the entire area was overgrown with weeds.

There was no indication on the ground that actual construction work would start any time soon, even though 30 months out of the project duration of four years and two months have already elapsed.

Although a number of farmers, whose farms are within the areas earmarked for the construction of the multipurpose dam, have been reached and duly registered, no efforts have been made to pay them compensation.

Some of the affected farmers said officials of the Volta River Authority (VRA) met them, took pictures of them, and gave them documents to sign with the assurance that they would be compensated since their farms were within the project area. However, the VRA has not kept to the promise.

The project comprises the construction of a dam with an elevation of 165m near the Pwalugu Bridge on the White Volta River with a maximum reservoir area of 350 km2.

It also consists of the construction of a powerhouse with two turbines that have 60MW of installed capacity and 16.5 MW of firm continuous capacity.

There is also an irrigation scheme consisting of a 12m high weir and canal network (main, primary, secondary and tertiary canals) for about 25,000 hectares of land.

On November 29, 2019, President Nana Addo Dankwa Akufo-Addo cut the sod for the construction of the multipurpose dam in Pwalugu in the Talensi District in the Upper East Region.

The historic ceremony was also attended by the Vice-President, Dr Mahamudu Bawumia, ministers of state, Members of Parliament and traditional rulers, including the Overlord of the Mamprugu Traditional Area in the North East Region, Naa Bohagu Abdulai Mahami Sheriga.

Addressing the gathering, President Akufo-Addo said the project, when completed, would hold large volumes of water spilled from the Bagre Dam for irrigation purposes and generate electricity as well.

He said “this project will be a permanent solution to the annual flooding of the beneficiary communities as a result of the spillage of water annually”, adding “upon completion, it will be the single largest investment ever made by the government in the northern sector of the country.

“For us in the New Patriotic Party (NPP) we do not renege on our promises and we keep them, hence the construction of the multipurpose dam for the benefit of the people in the beneficiary communities.”