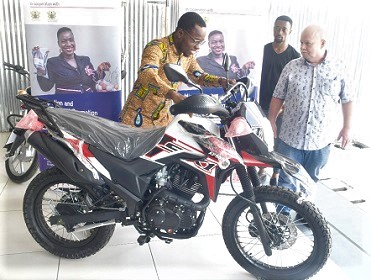 Mark Mehrlaender (right) handing over a motorbike to David Djangmah Tawiah, one of the beneficiaries
30.5k Shares

Ninety young entrepreneurs who were finalists in the German Development Cooperation (GIZ) business idea competition to enhance employment generation and reduce migration among the youth have been presented with their prizes at a ceremony in Accra.

The prizes ranged from industrial sewing machines, laptops, motorbikes, cake mixers, farming equipment, freezers and fridges among others, to help grow their businesses.

The competition was organised by MGA Consulting Ghana Limited, and funded by the German Development Cooperation, in collaboration with Deutsche Gesellschaft fur Internationale Zusammenarbeit (GIZ) Ghana through its Migration and Employment Promotion (MEP) component of the Programme for Sustainable Economic Development.

The competition, restricted to participants in the Greater Accra Region, is being replicated in seven other regions, including Ashanti, Bono East, Ahafo, Western, Central and Eastern regions.

The three-month competition attracted 464 participants, 120 of them shortlisted, before the 110 finalists went through a pitching process, with 90 people finally being selected.


The Chief Executive Officer of MGA Consulting Ghana Limited, Michael Abbiw, in an interview said the competition was focused on training, mentoring and awarding each of the successful candidates support in equipment worth GH¢9,000 to augment their business needs and to develop and grow their enterprises.

He said they realised during the competition that the youth had great ideas and that if well develop they could create a great opportunity for the country and help to develop the local economy.

He stated that the purpose of the business idea competition was to create a forum for Ghanaian youth to find their entrepreneurial potential and attitude in order to stimulate their business thinking.

“The competition's goals were to foster talent development and commercial innovation while also encouraging entrepreneurial activity within a network of like-minded individuals to project their entrepreneurial ideas,” he said.

Mr Abbiw said unemployment among young people had resulted in unsafe migration to other regions of the world, where they believed there were better and more comfortable options.

Migration is widely considered to cause political difficulties in the host or target nations.

Head of Migration and Employment Promotion (MEP), Mark Mehrlaender, who presented the prizes to the finalists, said the competition was part of a bigger effort to offer opportunities for young people in the country to create their own businesses.

He said although the government had policies to support people to create their own businesses, it was necessary to engage the youth more to know their challenges in order to offer them the appropriate support.

He said the MEP had equipped over 10,000 individuals, both potential and returning migrants with entrepreneurship skills since 2017 to kickstart or expand their businesses.

The project, he said, had already created over 800 jobs and self-employment opportunities, including a number of newly started medium and small scale enterprises.

"Over 150 returning migrants have also been supported with business advisory services and equipment to enhance re-integration efforts, while 400 participants have been trained in various skills," he said.

One of the beneficiaries, David Djangmah Tawiah, a bee keeper who was presented with a motor bike , said the programme was very impactful and would help their business to grow.