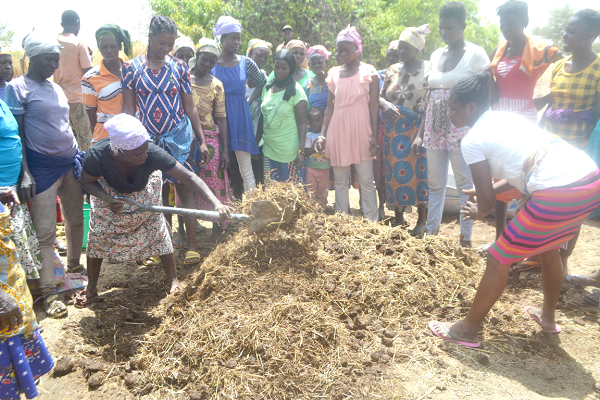 The women being taken through the organic compost production Follow @Graphicgh

Eighty women, mostly vegetable famers in Yakoti, a farming community in the Nabdam District in the Upper East Region, have benefited from a day’s training to produce organic compost for their faming activities.

The training, aimed at empowering the women to prepare their own compost and move away from the use of fertiliser in their farming activities, was undertaken by Maaltaaba Peasant Women Farmers’ Cooperative (MAPEWFAC), a Non-Governmental Organisation (NGO).

The beneficiary women made up of widows, single and teenage mothers who are already engaged in the cultivation of onion, tomato, cabbage, pepper, carrot, among others, were expected to prepare their own compost to apply it on their farms to ostensibly increase their crop yield.

Also, the NGO has secured funding support from the Forest and Farm Facility (FFF) through the Food and Agriculture Organisation (FAO) to support women to venture into tree planting to mitigate the effects of climate change.

Additionally, a 15-acre land has been acquired by the cooperative and a mechanised borehole constructed to assist women peasant farmers to grow economic trees and expand their vegetable production.

It is then poured into the hole in five layers and covered for three months to mature. After three months, the compost is dug out of the hole and ready to be applied on the vegetables.

The founder of the NGO, Lydia M. Miyella, told the Daily Graphic in an interview that their intervention was to also provide water to the beneficiary women to water trees to contribute to restoring the forest to address the issue of climate change.

“Indeed, the water we are providing for the peasant women farmers is to do three things; to water trees, irrigate their farms and to be used for their domestic activities” she said.

She said the move by the NGO was to support the women to do all year round farming so as to be able to produce enough vegetables for the market to earn the needed income to better their lives.

Baninima Tobil, a farmer for more than 10 years, said the training had been an eye-opener for her as she had been well-equipped with the skills and knowledge to prepare her own compost to use on her farm instead of spending so much money on fertiliser.

She said “the cost of fertiliser today is unbearable for the already poor women farmers and that the training acquired will enable her to prepare her own compost within the shortest possible time to apply it on her farm.

Another beneficiary, Eunice Dong said with the application of the organic compost on her farm, she would be able to increase her crop yield to earn extra money to take care of the family to improve their standard of living.

She said “with the use of the organic compost on the crops, we will be able to get the natural taste of the crops and as well as improve the health of consumers unlike fertiliser induced crops which had a lot of negative health effects on consumers”.