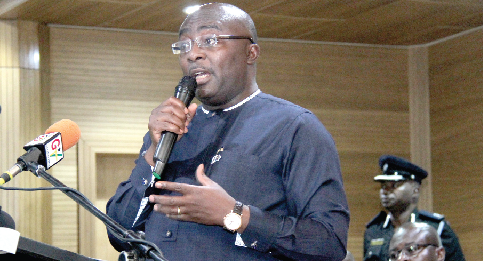 The Vice-President, Dr. Mahamudu Bawumia, has underscored the need for Ghana and China to explore new areas of cooperation beyond the existing relationship between them.

According to him, such a move would ensure that they tapped into the economic opportunities in both countries and also help Ghana replicate the success story of China.

He said this at a virtual symposium to commemorate the 60th anniversary of the establishment of Ghana-China diplomatic relations.

Dr. Bawumia said the depth of relationship that had existed between the two countries since July 1960 had become more robust and diverse, especially in the areas of trade, investment, culture, and international relations.

He added that the two countries continued to cooperate at the multilateral level and were working together to ensure a just, equitable and peaceful international order.

“On the economic trade and investment front, our two countries have deepened their cooperation. For the records, China is currently the largest investor in Ghana by the number of registered projects. It is also Ghana’s largest trading partner, with total value of trade reaching a record $7.5 billion in 2019, surpassing Ghana’s traditional trade pattern,” he said.

"Let this symposium be a platform for the exchange of ideas for the mutual benefit of the peoples of both Ghana and China," he added.

The Vice-President said Ghana was leveraging its status as host of the secretariat of the African Continental Free Trade Area (AfCFTA) agreement and urged Chinese investors to take advantage of the development and the conducive business environment in Ghana to access the continental market.

He said Ghana had positioned itself to become a major trading hub in the West African region, adding that the AfCFTA would mark a significant shift in how countries engaged with Ghana in the areas of trade and investment.

The Minister of Foreign Affairs and Regional Integration, Ms. Shirley Ayorkor Botchwey, said apart from the long-standing and exemplary relations between Ghana and China, both countries continued to cooperate at the multilateral level and within the framework of the Forum on China-Africa Cooperation (FOCAC) and the Belt and Road Initiative.

She said the relations between the Foreign Affairs ministries of Ghana and China had been deepened over the past 60 years.

The minister added that the institution of the Ghana-China Consular Consultation Framework within which consular matters were addressed further demonstrated Ghana's resolve to always collaborate, dialogue and find friendly, mutual and win-win solutions to difficult consular-related challenges.

On the coronovirus disease (COVID-19) pandemic, Ms. Botchwey said there was the need for countries to unite and collaborate with one another in the fight against the virus.

According to her, the existing excellent relations between Ghana and China would continue to thrive in the years ahead for the mutual benefit and prosperity of both governments and their citizens.

The President of the Chinese People’s Association for Friendship with Foreign Countries (CPAFFC), Mr. Lin Songtian, who gave an overview of the bilateral relations between the two countries, said they had chalked up remarkable achievements in the fields of culture, education and health care.

He said more than 6,000 Ghanaian students were studying in China at the moment.

Mr. Songtian said there was the need to consolidate social and public foundations in both countries, adding that virtues such as respect and trust for each other would create a solid and reliable foundation between the two countries.