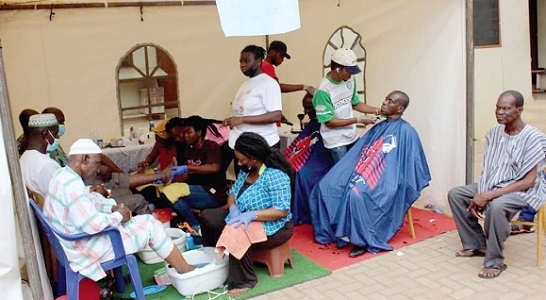 Some of the fathers being given a treat Follow @Graphicgh

A non-governmental organisation, 60+ Foundation has held a Father’s Day treat for fathers in Accra.

The event, held in collaboration with the Department of Social Welfare and Community Development of the Adentan Municipal Assembly, was targeted at celebrating and acknowledging fathers for their role in the family set-up, and also to give fathers with special needs the opportunity to enhance networking and socialisation among themselves within the municipality.

The fathers were offered various services, including general health screening, eye tests, barbering and grooming, as well as manicure and pedicure for all the fathers present.

The President of the foundation, Felix Osom, said it was heart-warming that the fathers accepted to participate in the occasion, and encouraged them to take advantage to establish networks as they socialised with their colleagues.

He underscored the important role of the father in the family setting, saying “fatherhood is a responsibility, fatherhood is courage, and fatherhood is carrying all your dependents’ needs and wants on your shoulders and showing the way”.

Mr Osom said the foundation, though very young, had identified the special needs of the segment of the growing population.

“We have, therefore, put together measures to advocate the health needs of the elderly, offer hospitality and social support services, aged care training and development,” he added.

The Chief Executive of the Adentan Municipal Assembly, Daniel Alexander Nii-Noi Adumuah, welcomed the fathers and members of the foundation to the event, and expressed lauded the foundation for the initiative that recognised the presence and importance of fathers in the family setting, describing it as “a good gesture”.

He encouraged the beneficiaries to patronise the various health centres within the municipality, and advised them to walk in frequently for a health check.