BY: Emmanuel Baah
Category: General News
Simon Osei Mensah (2nd from left), Ashanti Regional Minister, being assisted by Nana Kwame Nti, Krontihene of Agogo, to inaugurate the facilities provided on the land for the Plantain and Onion Market sellers at Agogo Follow @Graphicgh

A six-acre plot of land has been allocated to boost the trading of plantain and onions at Agogo, a farming community in the Asante Akim North Municipality in the Ashanti Region.

The traders before then occupied a small portion in the central business district of the town, popularly known as Russia Market, but the area could no longer contain the huge number of produce brought to the market.

The traders on markets days (Tuesdays and Fridays) used to extend their trading activities onto the streets and some unapproved places to sell their foodstuff, thereby causing congestion.

Many traders, especially those from neighbouring Burkina Faso, Togo and Niger, troop to the area on market days to buy a variety of food items, mainly plantain.

Currently, two out of the six-acre plot of land has been put into good shape, with vital facilities such a police post, washrooms, lighting system and a mechanised borehole provided to support business activities.

At the inauguration of the facility last Friday, the Ashanti Regional Minister, Simon Osei Mensah, assured the people that the government would deliver on its campaign promise of making life comfortable for them.

The minister and his entourage earlier paid a courtesy call on the Agogomanhene, Nana Akuoko Sarpong, at his palace at Agogo.

The project, according to him, was meant to facilitate commercial activities in the area to enhance the livelihood of the farmers and traders. 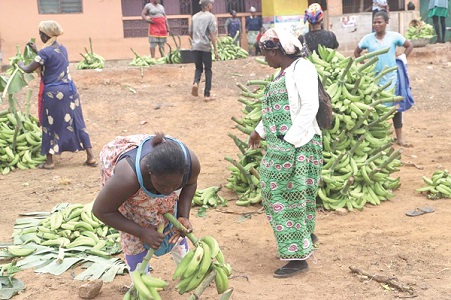 Projects currently under construction in the municipality include a ‘One District, One Factory’ (1D1F) facility for plantain processing, which is about 95 per cent complete; an ECG substation to address the recurrent power outages and an administrative office for the municipal assembly.

Mr Osei Mensah also inaugurated a Municipal Health Directorate and inspected a completed fire station during which he gave an assurance of the government’s resolve to provide the facility with a fire engine.

For her part, the Agogo Plantain Queen Mother, Nana Akosua Tawia, lauded President Nana Addo Akufo-Addo for responding to the appeal of traders.

She added that the facility would go a long way to create employment opportunities for the teeming youth who aspired to venture into agriculture.

The 2020 Best Female Farmer appealed to the government to lease a portion of Agogo’s forest reserve to the people for farming activities as they sought to boost food production to support the government’s flagship Planting for Food and Jobs programme.