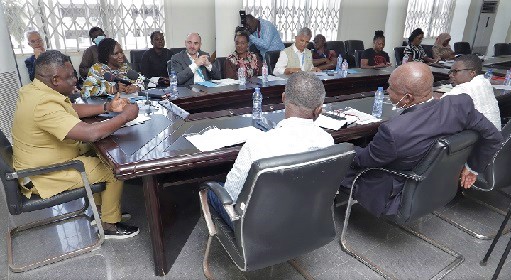 Forty-three out of the 48 countries in Africa are currently not performing well in the delivery of water, sanitation and hygiene (WASH).

The countries, according to the WHO/UNICEF Joint Monitoring Programme (JMP) for water supply, sanitation and hygiene report: 2015-2020, were also showing very slow progress.

It also said only three African countries with less than 99 per cent coverage were currently on track to achieve universal coverage of at least basic drinking water by 2030.

“Nearly three out of four people in Africa lack safely managed sanitation in 2020, while only three out of 48 countries with less than 99 per cent coverage are currently on track to achieve universal coverage of at least basic sanitation by 2030. In some countries, coverage is decreasing,” the JMP report said.

To change the narrative, policy makers, WASH experts, stakeholder institutions, among other participants, from 22 African countries and other parts of the world have converged on Accra for the first-ever regional meeting on accelerating the delivery of WASH for all regional visions and the UN sustainable development goals (SDGs).


Referred to as the ‘All systems go Africa’ conference, it is being hosted by the Ghana government, the IRC, an international think tank actively building WASH systems, and UNICEF.

The three-day conference, which opens today, is on the theme: “Uniting systems thinking with technical expertise and public policy to accelerate the vision of universal access to water, sanitation and hygiene”.

It offers Africa the opportunity to kick-start a continental agenda that will focus efforts on achieving effective and resilient governance, management of and operating systems for WASH.

It is aimed at highlighting the systems and processes required to accelerate the delivery of WASH for all and how effective they are for better outcomes.

In a message, the Minister of Sanitation and Water Resources, Cecilia Abena Dapaah, said the government and the IRC were challenging systems thinkers and public experts to advance a strong and clear agenda for system strengthening towards the delivery of WASH for all by 2030.

She wondered why so little progress had been made in the past 20 years and said without strong and resilient systems that worked well, the WASH sector in Africa would fail.

“While there remains a huge deficit in infrastructure, many of the available facilities are inadequately managed, they break down prematurely or are poorly regulated, under-funded and fall short of the dignified public service standards put forward in the human rights to water and sanitation,” Ms Dapaah said.

The IRC Director in charge of the African Regional Programme, Juste Nansi, said the slow pace of progress in the delivery of WASH was particularly worrying because, among others, the 2030 deadline for the global commitments African leaders had signed onto was fast approaching.

“It is now up to us to build strong systems that will accelerate the delivery of WASH for all for good,” he said.

The Deputy Sector Minister, Amidu Issahaku Chinnai, said with about three years to go for the delivery of the ambitious vision of Africa achieving sustainable access to drinking water and sanitation services, and with less than 10 years for the achievement of the SDGs, there was the urgent need to review systems.

“In the country, and, indeed, in Africa, the gallant march towards creating the world we want has been constrained by the ravaging effects of climate change, the devastating effects of the COVID-19 pandemic and recently the dire impact of the Russia/Ukraine conflict.

“Looking ahead, the government remains committed to the tenets of the SDGs and will continue to forge innovative partnerships with systems thinkers, among others, to stimulate urgent action and catalytic investments to accelerate progress towards African and global goals,” Mr Chinnai said.