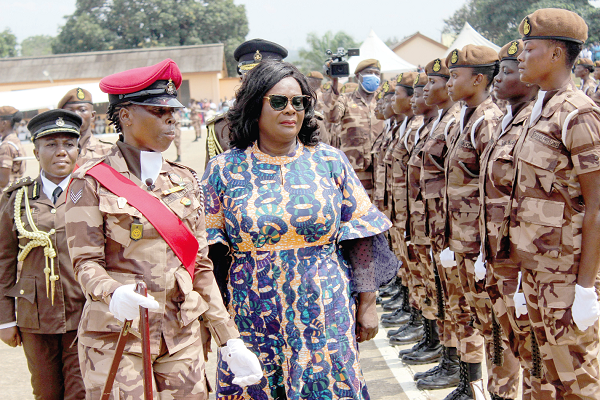 Some 409 recruits have graduated from the Prison Officers’ Training School in Accra to beef up the service’s role in the criminal justice system after eight months of intensive training.

The recruits, made up of 232 men and 177 women, went through paramilitary, physical fitness and practical assessment training with emphasis on prison and offender management.

The Deputy Minister for the Interior, Naana Eyiah, who was the reviewing officer for the passing out ceremony, declared the graduands of the Recruit Course 120 as graduates of the Prison Service.

The Recruit Course 120 is the third of four recruit courses to pass out this year.

Special awards were given to best performing recruits, with Joseph Obeng emerging as the Overall Best Recruit Officer.

The deputy minister urged the officers to respect the human rights of prisoners and relate to them in a kind and professional manner.

“Bear in mind that the Ghana Prisons Service thrives on discipline, and upholds the ideals of vigilance, humanity, determination and integrity; these principles should guide you throughout your career, if you are to succeed,” she said.

She further urged them to develop positive attitudes in the conduct of their personal lives, urging them to accept postings to wherever their services were needed.

Naana Eyiah reiterated government’s commitment to ensure that the prisons were thoroughly decongested.

In that regard, the deputy minister said stringent measures were being put in place to build more prisons in order to reduce overcrowding in the facilities.

The Nsawam Remand Prison, she said, was 75 per cent complete, while the Camp Prison, being funded by the Pentecost Church, would soon be inaugurated to kickstart the intended decongestion exercise.

To ensure effective deployment and utilisation of the skills and talents of prison inmates, the deputy minister said programmes and resources for reformation and rehabilitation were being expanded to ensure effective treatment, education and skills training of the inmates.

She urged corporate Ghana, faith-based groups and non-governmental organisations to continue to offer support to the service.

A recruit, Victoria Yeli, said she was excited to be part of the graduates and expressed the hope to continue her studies to attain a senior rank in the Prisons Service.

“I am very happy to be part of Ghana Prisons Service,” she said.

“I hope to achieve a higher rank and help to maintain the security of the country,” said Marcus Moore, another recruit.