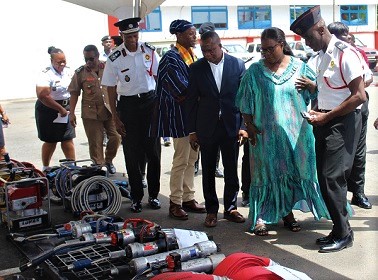 The Ghana National Fire Service (GNFS) responded to 4,467 fire outbreaks between January and August this year.

The service also attended to 444 road traffic collisions (RTC) and 107 rescue duties in the same period.

This was contained in statistics presented by the Chief Fire Officer (CFO), Julius Kuunour, during the presentation of fire-fighting and rescue equipment to the service in Accra yesterday[September 7, 2022].

The equipment was donated by a philanthropist from the British Royal Army, Storms Menri.

Giving a breakdown of the figures, Mr Kuunour said the service, in January, recorded 1,090 fire outbreaks, with bush fires being the highest - 432, while there were 317 domestic fires.

In February, out of the 762 fire outbreaks that occurred, 239 cases were domestic, with bush fires accounting for 224, with only four industrial fires.

In March, there were 551 fire outbreaks, a decline of 211 from the previous month, representing 27.7 per cent.

The highest category recorded in that month was domestic fires - 207, electrical and bush fires - 78 each, and three industrial fires.

In the month of April, there was a further decline of 81, representing 14.7 per cent.

The service recorded 470 fire outbreaks in that month, with domestic fires being the highest - 184. Electrical fires were 111, with only one industrial fire.

In May, there was a decline of seven, representing 1.4 per cent. In all, there were 463 outbreaks, with 195 domestic fires, 85 electrical fires and two industrial cases.

In June, the number further declined by 116, representing 33.4 per cent. There were 347 fires, out of which 148 were domestic, 82 electrical and two industrial.

In the month of July, there were 351 outbreaks, with domestic fires accounting for 157 and commercial fires 75.

Mr Kuunour said the service had set a goal to reduce fire outbreaks by 60 per cent by the end of this year.

“This calls for us to redouble efforts by mobilising all material and human resources to achieve this goal,” he said.

A Deputy Minister for the Interior, Naana Eyiah, said there were plans to procure quick intervention vehicles for the service.

She expressed appreciation to the benefactor for the support and entreated individuals and corporate bodies to augment the government’s efforts at retooling the GNFS.

Mr Menri explained that his decision to support the service was born out of his desire to keep the personnel safe and also enhance their operational efficiency.

“Understandably, I have been prompted that RTC extrication gear is the number one priority of the service. We will, therefore, focus on that in the future,” he said.