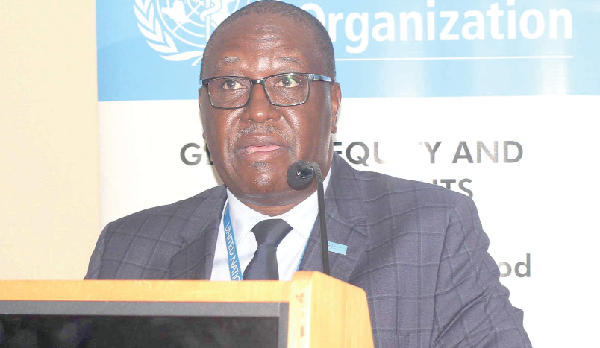 Dr Francis Kasolo (left), World Health Organisation Representative in Ghana, addressing participants at the conference on the Implementation of the International Global Action on Epilepsy and Other Neurological Disorders and Strengthening Public Health Approach to Epilepsy in Ghana. Picture: Maxwell ocloo
30.5k Shares

It is estimated that about 300,000 people in the country are epileptic.

What is worse, many people do not know they have epilepsy, as diagnoses are not properly done in the country.

An epileptologist at the University of Ghana, Legon, Prof. Patrick Adjei, made this known at an intersectoral global action plan on epilepsy, neurological disorders and strengthening public health approach to epilepsy in the country.

It was organised in Accra by the World Health Organisation (WHO).

Epilepsy is a brain disorder that causes recurring, unprovoked seizures. It may occur as a result of a genetic disorder or an acquired brain injury, such as trauma or stroke.

During a seizure, a person experiences abnormal behaviour, symptoms and sensations, sometimes including loss of consciousness.

It is usually treated by medication and, in some cases, surgery, devices or dietary changes.

It is estimated that, globally, about 50 million people suffer from the disorder.

Out of that number, 80 per cent live in low and middle-income countries where, according to the WHO, only one out of four had access to treatment.

According to Prof. Adjei, although health authorities were focusing on convulsive epilepsy, there were other forms of epilepsy which were non-convulsive, including staring, repetitive blinking, chewing, swallowing and automatism.

Non-convulsive epilepsy, he added, represented a considerable burden in prevalence which, if not treated, interfered significantly with a person’s functioning.

He said those placed a huge burden on the country which had little capacity to care for people with mental health and neurological disorders.

Pro. Adjei is also a team member of the country’s Epilepsy Pathway Innovation in Africa (EPInA) project which aims to improve the quality of life of people with epilepsy in sub-Saharan Africa by addressing all aspects of treatment pathway: prevention, diagnosis, treatment and awareness.

Between 2019 and 2024, the EPInA team is working in Accra, Nairobi, Kilifi and Mahenge to improve prevention, diagnosis, treatment and awareness of epilepsy.

He said so far there had been some awareness creation and diagnosis programmes in the Shai-Osudoku and the Ningo-Prampram districts in the Greater Accra Region.

He added that they were also working at improving care and the reduction of stigma of people with epilepsy within the two districts.

The WHO Regional Advisor on Mental Health and Substance Abuse, Dr Florence Baingana, said 85 per cent of the epilepsy burden in the world was in sub-Saharan Africa.

She said stroke was the largest contributor to neurological disability-adjusted life year (DALY) globally and in all African regions where meningitis ranked second in three out of four countries.

She said access to service and support, including essential, cost-effective medicines for neurological disorders, was insufficient, especially in low and middle-income countries.

The Head of the Health Unit of the WHO, Dr Tarun Dua Brain, said neurological disorders were the leading cause of DALY and also the second leading cause of death — 16·5 per cent or nine million deaths annually.

The WHO Representative in Ghana, Dr Francis Kasolo, said the organisation would continue to partner the government to work towards reducing the epilepsy treatment gap in the country.

He said a ‘Fight against epilepsy’ initiative rolled out in the country between 2012 and 2016 provided treatment and care for more than 2,700 people.

According to him, the WHO had expanded its work on epilepsy treatment and care with the introduction of a flagship programme, the Health Gap Action Programme (mhGAP), which he said was aimed at training non-specialist health workers to diagnose and manage mental, neurological and substance use conditions.