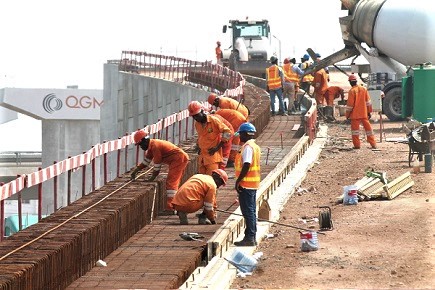 Engineers working on the second phase of the Obetsebi Lamptey Interchange say they are on course to meet the March 2023 completion deadline.

They estimate the current state of the project — which started in February 2021 — to be about 64 per cent complete.

The second phase is a third tier flyover stretching from the Awudome Cemetery to the Abossey Okai Central Mosque, and underground storm drains around the area.

At the site yesterday[August 22, 2022], technical staff and labourers worked on the edge beams, also known as the workmen walkways, on the ramps on Abutment Two — the thick pillars which will carry the descending or ascending deck — while others prepared to lay blinding concrete.

Ramps are the sloped pathways on each side of the flyover.

Filling of the ramp with laterite and crushed rocks were already done and compacted along with binding and steel reinforcement on the ramp.

At Abutment One — situated near the Abossey Okai Central Mosque — the blinder, which is the base layer of weak concrete laid above a layer of hardcore to provide dry working surface, had already been laid.

The side drains and workmen walkways had also been done.

“We are currently working on the ramp of Abutment Two. However, concrete and asphalt works for the walkways have been completed on Abutment One,” the Resident Engineer of the project, Owusu Sekyere Antwi, told the Daily Graphic.

He said the construction of the underground box culvert would allow the free flow of water in the area.

“The steel bridge is currently being fabricated in England. We expect to receive the first batch of the shipment in the country by mid-September,” he said.

In relation to compensation, Mr Antwi said although few properties were affected by the construction, compensations had not been made to affected people yet.

He mentioned that shop owners, who had to close their shops or relocate due to the construction, were among people to be compensated for loss of income.

Meanwhile, he pleaded with motorists to bear with the construction process.

“We urge pedestrians to use the walkways for their safety. We are also urging motorists who park on paths created for pedestrians to desist from such acts,” he said.