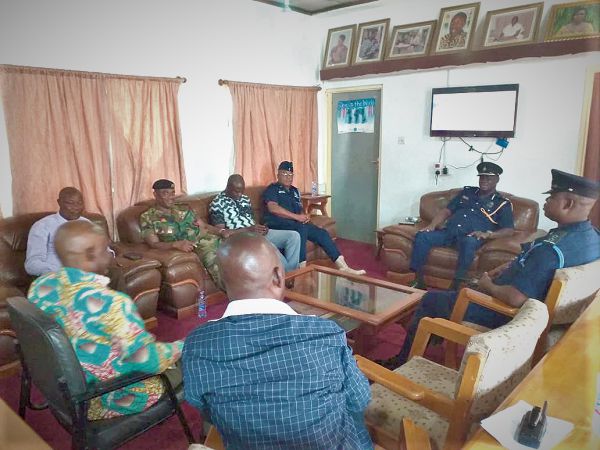 Two persons have been shot dead and six others injured during a crossfire between a military task force and a section of the youth at Alavanyo-Dzogbedze in the Hohoe municipality in the Volta Region.

The incident, which occurred on Sunday, January 13, 2019  followed a military intervention to retrieve an AK47 rifle and three handcuffs seized from the police by the youth of the town.

Briefing the media in Ho yesterday, the Volta Regional Police Commander, Deputy Commissioner of Police (DCOP) Mr Francis Ebenezer Doku, said the police gathered intelligence that the people of Alavanyo-Dzogbedze were massing up arms in the community and, therefore, six personnel were deployed to the area to retrieve the weapons.

He said in the course of the operation, the youth snatched an AK 47 and three handcuffs from the police and also hit the forehead of a police officer with an object, thus making him unconscious.

DCOP Doku said the police withdrew quietly from the operation zone and lodged a complaint at the Kpando Divisional Command of the police which in turn sought the assistance of the military patrol team in the area for the retrieval of the gun and handcuffs.

He said when the military team responded and were in discussions with the chief of the town over the issue, the youth allegedly interrupted the meeting and caused a blackout in the town in the night.

As a result of the breakdown of talks, the soldiers retreated and on their way back to their base, they heard a series of gunshots in their direction to which they replied, leading to the death of two persons and injuries to six persons, the commander said.

The bodies of the deceased persons have been deposited at the Margaret Marquart Hospital at Kpando.

DCOP Mr Doku said the Volta Regional Security Council (REGSEC) would be moving to the scene to investigate the cause of the crossfire, which occurred between 6.30 p.m. and 7 p.m.

He emphasised that the police would not take kindly to the youth of Alavanyo-Dzogbedze if they failed to surrender the AK 47 and other items they seized, adding that the weapons would be retrieved from them at all cost.