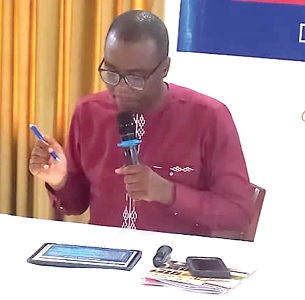 Prof. Charles Amoatey, Principal Investigator of the research and Senior Lecturer at GIMPA, speaking at the event Follow @Graphicgh

A survey conducted by the Ghana Institute of Management and Public Administration (GIMPA) has revealed that the dams constructed under the government's flagship programme, One-Village, One-Dam (1V1D), are not serving the intended purpose.

According to the survey, over 80 per cent of households sampled in the project areas in northern Ghana indicated that they were unable to use the dams for dry season farming because most of them dried up during the period, while others were sited on bad landscapes unsuitable for farming.

It, however, said that 49.5 per cent of beneficiary communities said they used the dams as the main source of water for livestock.

Also, nine per cent of the respondents said they used the dams for commercial purposes, such as brick moulding, shea butter processing and pito brewing, while 14 per cent also used them for domestic purposes.

This came to light at a workshop in Tamale, the Northern Regional capital, to disseminate the baseline survey which was conducted to assess the impact of the 1V1D programme on irrigation and agriculture in northern Ghana.

It was organised by the International Centre for Evaluation and Development (ICED), in partnership with the Feed the Future Innovation Lab Market and Risk and Resilience, a project of the University of California, USA.

The survey, titled: "Impact of irrigation, improved productivity and market value for smallholder farmers: Evidence from One-Village, One-Dam Policy in Ghana”, formed part of the Advancing Local Leadership - Innovation and Network (ALL-IN) projects being implemented by ICED and its partners.

The Principal Investigator of the research and senior lecturer at GIMPA, Professor Charles Amoatey, said the research identified that the depth and storage capacity of the dams, as well as the quality of the embankment and spillway of some of them, were not up to standard.

He, therefore, called for the expansion of the water holding capacity and the fixing of valves on the dams, while entreating the government to come up with clear policies and guidelines to clarify the roles of each stakeholder, including metropolitan, municipal and district assemblies (MMDAs), the Northern Development Authority (NDA), the Ghana Irrigation Development Authority (GIDA), among others.

The President of ICED and Co-Director of the ALL-IN programme, Dr David S. Ameyaw, said the project was a joint research programme in Africa that sought to create opportunities for researchers to conceptualise, design and develop Africa’s research priorities and write proposals to influence policy direction for the growth of the continent.

He said about 12 research works were ongoing in eight African countries under the ALL-IN programme, out of which four were being implemented in the country.