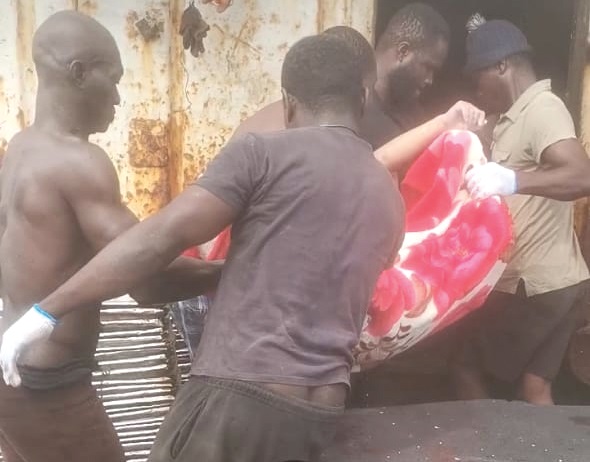 One of the bodies being conveyed into the boat Follow @Graphicgh

Last Friday’s heavy downpour, thunderstorms, high current off the coast of Sekondi, and heavy catch by a group of fishermen on fishing expeditions, resulted in the capsizing of their boat which left 11 people, including a Chinese national and a fisheries observer, missing at sea.

The accident, which occurred last Friday, May 6, some 11 nautical miles south of Takoradi, also claimed the life of the Chinese Captain of a fishing vessel, MV Comforter II, though 15 have been rescued.

The vessel, with the registration number 627138000, according to information available to the Daily Graphic, sank when the crew members were hauling the catch onto the deck of the vessel.

The Comforter II left the Tema Fishing Harbour for the expedition on Wednesday, May 4, 2022.

The deceased Captain has been identified as Cai Yuanqu, 62.

While the identity of the fisheries observer has been known but being withheld, that of the 10 sailors remain unknown due to what the police source says, was as a result of the Log-book also sinking along in the accident.

Daily Graphic sources at the Marine Police Unit who confirmed the incident said initial investigations suggested that the vessel, which had 26 people on board (made up of 20 Ghanaians and six Chinese nationals), capsized while the catch was being hauled onto the deck.

The source indicated that the weight of the catch, coupled with high tides at sea as a result of heavy rains, led to poor stability which resulted in the accident.

Officials who wish to remain anonymous, however, said they could not establish whether the vessel had other reported problems such as leakages or structural failures which caused it to take in water quickly after it capsized.

The source said that the owner of the vessel, Kojo Ampratwum of Botacom Fishing at the Tema Fishing Harbour, reported the incident to the police on May 6.

It added that some of the survivors were lucky to have floating materials such as wood and life buoys (an emergency floating material) to hold on to until they were rescued, within a 12-hour by a nearby Good Samaritan fishing vessel, Canon 404, and brought to hospitals in Elmina and Tema.

“We have deposited the body of the deceased Chinese national at the International Maritime Hospital (IMaH) mortuary in Tema while the 14 members of the crew who were rescued are receiving treatment at the Port Medical Centre in Tema, out of which five have been treated and discharged,” the source said.

The Ghana Navy, the Daily Graphic understands, has joined a vessel, Menghxin 6, which has mounted a rescue mission for the remaining 11 crew members who were still missing at the time of filing this report.