100-year-old Akokoaso classroom block to be pulled down: Sod cut for new complex 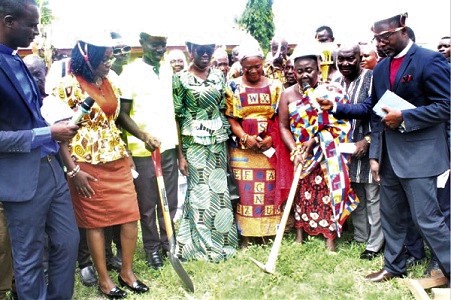 Nana Agyeiwaa Kodee II, the Queen Mother of Akyem Akokoaso, cutting the sod for the construction of the new classroom complex as other stakeholders look on Follow @Graphicgh

A group that calls itself the Concerned Citizens of Akokoaso (CCA) has cut the sod for the construction of a classroom complex for the Akyem Akokoaso Presbyterian Basic School in the Akyemansa District of the Eastern Region.

The new classroom complex will replace a dilapidated classroom block of the school, which is said to be over 100 years old.

In an interview with the Daily Graphic, the headteacher of the Akokoaso Presbyterian Basic School, Yawson Frimpong, said the school, which started in 1902, had its primary classroom block constructed in 1911.

He added that the classrooms, built with clay, last saw the rehabilitation of certain portions in 2004, with some pillars, made of wood, being replaced with metals to hold the building and roof, while the building was plastered with cement.

Mr Frimpong said any time the weather threatened to rain, pupils were moved to classes which appeared more formidable, though they were also not in the best of state.

"When we sense any threatening weather, we move them to the other classroom block (B Block), which is in a better shape than the other, to avoid any catastrophe. About two years ago, the roof on class one 'A' was ripped off by a very strong wind one weekend, and the Member of Parliament of Ofoase-Ayirebi, Mr Kojo Oppong Nkrumah, came to our aid.

“That's why the roof appears newer than the rest. Our gratitude is that all these incidents happened on weekends," he said.

The sod-cutting was held last Friday to officially commence the construction of the new structure under the supervision of Shin Shoji Construction Limited.

The one-storey complex will have eight classrooms for the lower and upper primary as well as the kindergarten streams.

The complex, which is estimated to cost US$ 250,000, is expected to be fully completed within a year and will see the computer laboratory furbished with all accessories as well as new furniture for all the classrooms.

Mr Frimpong lamented the sanitation condition of the school, which has a population of nearly 900 pupils.

The situation, he said, had contributed to teenage pregnancy among young girls every year except this year, as pupils, who sought permission to use toilet facilities outside the school, due to their unavailability in the school, ended up in men's rooms. 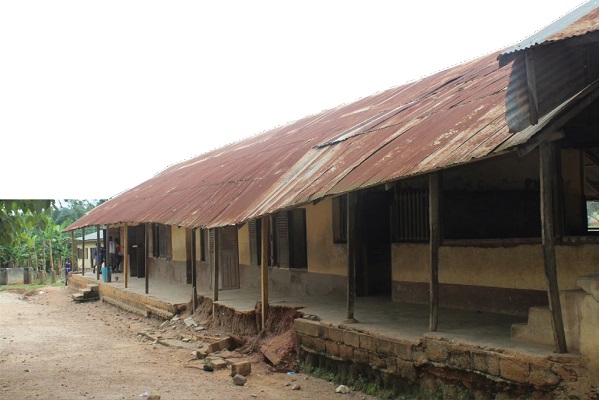 Human activities such as smoking by drug addicts in the classrooms at night, and the use of the classrooms as places of public convenience, coupled with animal droppings were some of the challenges faced by the school.

He added that pupils scrubbed their classrooms almost every morning to eliminate the stench emanating from human faeces and animal droppings before classes commenced.

The President of CCA, Ernest Oteng, indicated in an interview that the building of a new complex had become a subject of interest for the association, due to the threat the old block posed to the lives of the pupils.

He noted that barely a month ago, a thunder storm ripped off the Primary 'A' classroom block, which he described as a warning sign that there was imminent danger. He expressed optimism that the new complex would make schooling exciting and safe for the pupils, and motivate the teachers, which would translate into the improvement in academic performance.

"There was a downpour characterised by thunder storms, which took off portions of the roofs. Also, you can see that the foundation holding the building is no longer strong and could collapse at any time, hence the need to build a new classroom block and bring down the old structure to avoid any calamity. Fortunately, we appealed to the members of the CCA in the diaspora and they have responded favourably," he said.

Professor Kwasi Kyei Amoabeng, a ranking member of CCA in the diaspora, and an old student of the school who joined the sod cutting ceremony virtually from Japan, appealed to all members of the community to support the project in cash and kind to see to its completion.

He added that at least a member of every family within the community had had education in the oldest school at Akokoaso, urging other community members in the diaspora to also join in the project and not leave it to the association alone.

The Eastern Regional Minister, Seth Kwame Acheampong, who could not attend the ceremony, donated 50 bags of cement to support the construction of the classroom complex.

An old student of the school, the Head of Facility, Logistics and Asset Management at the Ghana Revenue Authority, Deputy Commissioner Maxwell Osei-Gyamerah, donated 50 bags of cement towards the project.

Observations made by the Daily Graphic revealed that the foundation of the Primary 'A' classroom block, made of mud, had been exposed due to erosion and it was deteriorating by the day, especially during heavy rains.

It was also noticed that a classroom had been scrubbed due to human faeces, which generated a stench; all desks had been moved to other classrooms before the arrival of the Daily Graphic.

The wooden pillars holding the roofs and offering support to the classroom block had become weak and required urgent attention to avert any danger.