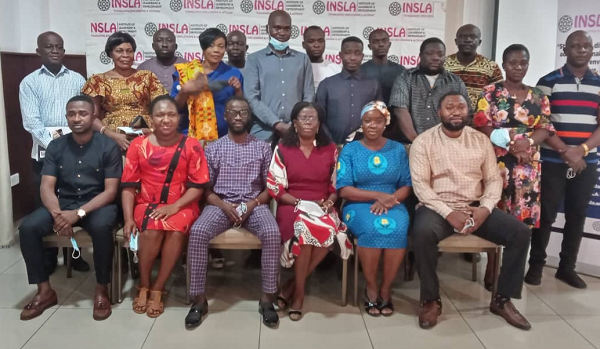 Participants and officials from INSLA, Ghana Health Service and academia in a group photo after the workshop Follow @Graphicgh

The Institute of Leadership and Development (INSLA), a non-profit civil society organisation in Accra, is urging the government to resource the country’s Food and Drugs Authority (FDA) with service laboratories to enable them to test Trans-Fatty Acids (TFAs) in food products in the country.

According to the NGO, TFAs are dangerous to human health if consumed, noting that many imported foods contained TFAs but because the country did not have laboratories to test them, such foods easily make their way into the country’s markets.

Speaking at a day’s capacity building and consultative workshop for political parties on TFAs elimination in the country on Thursday, February 24, 2022, the Project Manager of INSLA, Mr Issah Ali, said consumption of TFAs would go a long way to affect the health of many Ghanaians.

For him, equipping the FDA with the needed logistics would help the country to easily raise alert on food products that pose threats to people’s health.

He said the training was to help engage the various political parties on the need to take issues of TFAs seriously and to help gather support for its elimination in the country.

“We are gathered here this morning for two major activities mainly to bring to fore the World Health Organisation (WHO) REPLACE Technical Package towards the global elimination of Trans-Fatty Acid by 2023 and consultative meeting to eliminate Trans Fat in Ghana,” he said.

Trans-fatty acids are manufactured fats created during a process called hydrogenation, which is aimed at stabilising polyunsaturated oils to prevent them from becoming rancid and to keep them solid at room temperature.

TFAs are fats created during food preparation, and can also be found in snacks, baked or fried foods or oils used in the cooking at home, restaurants or by street vendors.
Trans fat is considered the worst type of fat to eat.

According to the World Health Organisation (WHO), increased intake of trans-fat (greater than one per cent of total energy intake) is associated with increased risk of coronary heart disease mortality and events.

Mr Ali said at least 500,000 people die annually around the world through heart disease, pointing out that TFAs are the leading causes of heart diseases and stroke in the world.

He said a report by the Ghana Health Service in 2021 indicated that TFAs could contribute to 12,000 to 16,000 stroke cases in Ghana.
Action needed

In a presentation, Dr Phyllis Addo, a Lecturer at the University of Health and Allied Sciences (UHAS), expressed the concern for an urgent need to regulate the penetration of TFAs in both imported and locally produced foods in the country.

For her, Ghanaian markets have been flooded with imported processed foods that were generally known to contain some amount of TFAs, mentioning plantain chips and some cooking oils as examples.

She also expressed the concern lifestyle related diseases were killing many people in Ghana, calling on Ghanaians to pay more attention to their diets and lifestyles.

Dr Addo also called on the media to help sensitise Ghanaians about the effects of consuming foods that contained TFAs, noting that many Ghanaians were not aware of the impact of TFAs.

She said a research she led to conduct revealed that majority of Ghanaians had never heard or read about TFA and only a few knew of the link between intake of TFA and diseases like cancers, diabetes, hypertension; and the general poor practices regarding usage of cooking oils.