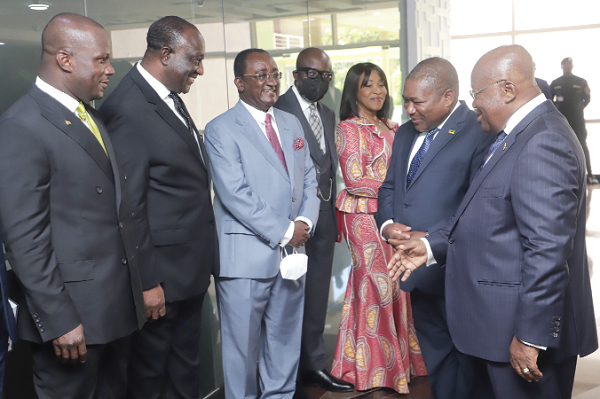 Ghana and Mozambique have condemned the Russian invasion of Ukraine and called for an immediate end to the hostilities that are having a debilitating impact on economies around the globe, especially Africa.

“We both condemn the Russian invasion of Ukraine and call for an immediate cessation, as its effects, together with the ravages of COVID-19, are proving to be devastating to the entire world, particularly for those of us on the African continent,” President Nana Addo Dankwa Akufo-Addo said.

The President made the condemnation yesterday when he addressed a joint press conference with the visiting Mozambican President, Filipe Jacinto Nyusi, at the Jubilee House in Accra after bilateral discussions by the two and their delegations.

Mr Nyusi, who arrived in the country last Sunday night on a state visit, arrived at the Forecourt of the Jubilee House yesterday morning and was led to the Saluting Dais by the Director of State Protocol, Samuel Kumah, for the National Salute and the playing of the two national anthems.

The visiting President inspected a Guard of Honour mounted by the Ghana Armed Forces, while a 21-gun salute boomed from behind.

Mr Nyusi took the dais again for the National Salute and was later escorted to the Glass Door, where he was met by President Akufo-Addo.

The two leaders exchanged pleasantries, and after official photographs, went for a tete-a-tete and later joined their delegations for bilateral talks.

President Akufo-Addo said the two countries also agreed that current world circumstances demonstrated the urgent need to pull back on the global agenda and demand the reform of the United Nations.

That, he said, was more imperative, especially the composition and structure of the UN Security Council, on the basis of the common African position on the reform, as captured in the Ezulwini Consensus.

He commended Mozambique for supporting Ghana to its current position as a non permanent member of the UN Security Council and assured Mozambique that Ghana would do same for that country.

“Ghana is helping to ensure that Africa's voice is heard loud and clear in the deliberations of the Security Council, both on matters affecting the continent and global issues, and both of us are consulting broadly to define Africans interest,” he added.

President Akufo-Addo announced that Ghana and Mozambique had elevated their bond to a strategic partnership by convening a Permanent Joint Commission for Cooperation to govern the relations between them.

According to President Akufo-Addo, the agreements would enable the two nations to boost further political and economic relations, cultural and people-to-people exchanges, as well as their co-operation at the continental and global levels, especially “in these noble challenging circumstances”.

Giving details of the pact, he explained that the two nations explored areas of possible co-operation for the mutual benefit of their peoples.

He said the discussions, which centred on areas such as education, training, industry, agriculture, defence co-operation, immigration, environment, energy, science and technology and tourism, were held in an atmosphere of brotherly cordiality and fruitful exchanges.

President Akufo-Addo commended Mozambique for its resilience in the face of terrorists’ provocations that threatened its integrity and contributions by some African countries, including military aid and logistical support, to help Mozambique restore peace and rebuild areas affected.

He gave an assurance of Ghana’s commitment to international peace and security, especially in helping to end the scourge of terrorism and violent extremism on the continent.

The President said the two countries rejected the recent trend of coups and unconstitutional changes in government that were threatening to derail the democratic dispensation on the continent, especially in West Africa.

He said it was the belief of the two leaders that a stable democratic system could better help unleash the energies of Africans to inspire the transformation of the continent.

“Ghana will continue to collaborate with Mozambique to find solutions to challenges such as the eradication of widespread poverty, elimination of irregular migration, security and human rights violations, terrorism and violent extremism, human and drug trafficking, piracy, as well as climate change and its attendant negative impact on the environment and livelihoods,” he added.

Mr Nyusi recounted the support Ghana gave to Mozambique during its independent struggle and said his country would forever remain grateful.

He said the joint commission was very crucial in ensuring that the pacts signed and other areas of co-operation were guided to ensure mutual benefit for the development of the two nations.