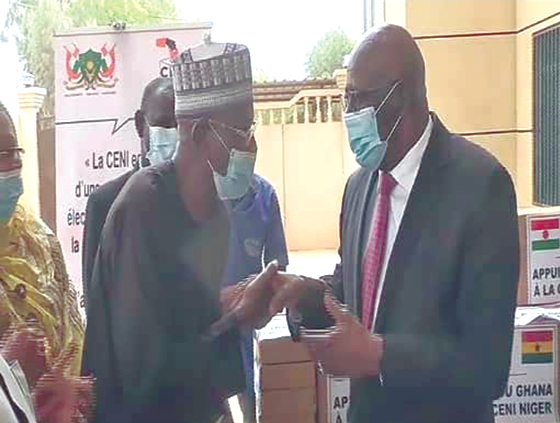 Ghana has donated 100,000 units of election thumbprint pads to the Niger Independent National Electoral Commission (CENI) towards the conduct of the second round of presidential election in that country.

Ghana’s Ambassador to Niger, Mr Jonathan R. Magnusen, presented the items to the CENI in the Nigerien capital, Niamey, yesterday.

The donation was made on behalf of President Nana Addo Dankwa Akufo-Addo, who is also the Chairman of the Authority of Heads of State and Government of ECOWAS, and the Electoral Commission (EC) of Ghana.

It was in response to a request CENI made to Ghana for assistance due to pressure to meet constitutional time limits for the organisation of the second round presidential election, as well as delays in the global supply chain as a result of the COVID-19 which made it impossible to receive replenishment in time for the election.

The second round election, scheduled for next Sunday, is between a former Head of Niger's Interior and Foreign ministries, Mr Mohamed Bazoum, who secured 39.3 per cent of the votes in the first round, and former President Mahamane Ousmane, who garnered 16.9 per cent of the 5.1 million valid ballots cast.

The run-off became necessary when none of the 28 candidates in the December 27, 2020 presidential election secured majority votes.

Mr Magnusen noted the satisfaction of the government and the people of Ghana with the democratic path Niger had embarked on, which resulted in the election of December 2020, the outcome of which had been hailed by stakeholder civil society groups, election observers and the international community to be generally free, fair and credible.

He further underscored the high turnout in the election, particularly the participation of women, as a demonstration of the will of the people of Niger to reinforce and consolidate democracy, good governance, stronger democratic institutions, respect for human rights, justice and the rule of law in the country.

The Ambassador described the donation as another milestone in the long history of brotherliness, friendship, cooperation and mutual assistance that had characterised relations between the two countries for more than a century.

Mr Magnusen recalled the pioneering efforts of the first Presidents of both countries, Dr Kwame Nkrumah of Ghana and Mr Hamani Diori of Niger, to unite the African continent with the common purpose of African emancipation, human, social and economic development.

Both leaders also pursued a vision to let all Africans come to the realisation that they were one people with a common destiny, regardless of the cultural and linguistic differences, as well as the artificial borders that separated them as a result of the colonial experience, he said.

Ambassador Magnusen underscored the role of CENI in the democratic process and expressed the admiration and commendation of the government and the EC to the President and the staff of CENI for their outstanding efforts to ensure a successful election in December 2020, in spite of the security, infrastructural, logistic and other challenges.

While noting that Ghana was often described as a beacon of democracy in sub-Saharan Africa, he said democratic credentials and experience had taught Ghana that democracy could not thrive and be consolidated without respect for the will of the people.

He paid tribute to Nigerien President, Mr Mahamadou Issoufou, for his decision not to seek an extension of his constitutional two-term mandate, a decision that had earned him the respect and admiration of the international community.

Ambassador Magnusen expressed the hope that the donation would complement the efforts of the Nigerien government to ensure a successful, free, fair and credible second-round presidential election to usher in a constitutional successor to the current government.

The President of CENI, Mr Issaka Souna, expressed profound gratitude to President Akufo-Addo, the EC and the people of Ghana for the prompt assistance to facilitate the second round of the presidential election.

He thanked Ghana for the speed with which it responded to the request, as well as the spirit of generosity, fraternity, solidarity and cooperation that characterised the entire process of arranging and delivering the consignment to Niger.

He noted that ECOWAS had put in place a system for the common management of electoral processes, mutual assistance and the provision of goods and services by member states.

While recognising the donation from Ghana both as a national show of solidarity and support and a gesture within the ECOWAS framework, he expressed the hope that the ECOWAS framework of mutual assistance towards elections would be strengthened, and called on the authorities and institutions of other member states of ECOWAS to make the necessary efforts to work together in the management of election materials.

Mr Souna also emphasised that the donation would assist CENI to organise a transparent election, and gave an assurance that the people of Niger “will exercise their sovereign franchise on 21st February in a manner characterised by transparency and freedom of choice”.