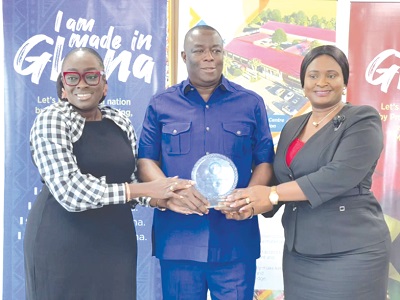 The bank received the Africa Best Market Initiative for its “Tuesday Market” initiative.

The award was announced at the first-ever AU SME Annual Forum held in Cairo, Egypt from June 27 to July 1, this year.

The African Union (AU) organised the award and forum in collaboration with the All Africa Association for Small and Medium Enterprises (AAASME).

The Secretary-General of the AAASME, Dr Ebiekure Jasper Eradiri and the Legal Advisor of AAASME, Warmate Jones Idikio, presented the award to the management of GEXIM, led by the Chief Executive Officer, Lawrence Agyinsam, at the bank’s head office in Accra last Tuesday.

Mr Agyinsam congratulated the AU and AAASME on introducing the AU SME Annual Forum, a platform that seeks to promote and strategise for a better, more inclusive African SME sector, to realise Africa's industrialisation in the context of the integrated market.

He expressed the bank’s appreciation to the organisers for the recognition of its “Tuesday Market” initiative.

“As a Development Bank of the state, Ghana Exim Bank is committed to supporting the government of Ghana’s agenda to reposition the economy into an export-led one,” he said.

“In addition, the bank has a vision to become a strong financial institution that will be a key driver in the development of Ghana’s export trade, facilitate cross border trade and make Ghana a pillar in regional and continental trade,” Mr Agyinsam added.

For her part, the Deputy Chief Executive Office of GEXIM responsible for Business and Banking, Rosemary Beryl Archer, highlighted the importance and dominance of the SME sector in the business environment and its critical role in the national development agenda as well as economic transformation of several countries globally.

“The significant role the SME sector plays cannot be underestimated, accounting for over 50 per cent of private output. With the “Tuesday

Market initiative”, we are promoting Ghanaian products and preparing our SMEs for export through building their capacities and adding value to their products”.

Dr Eradiri indicated that the award was intended to spur GEXIM to do more within its mandate to impact more individuals and the entire SME ecosystem.

He further expressed AAASME's intention to collaborate with GEXIM to replicate its award winning initiatives and successes in other African countries for the benefit of the teeming SMEs.