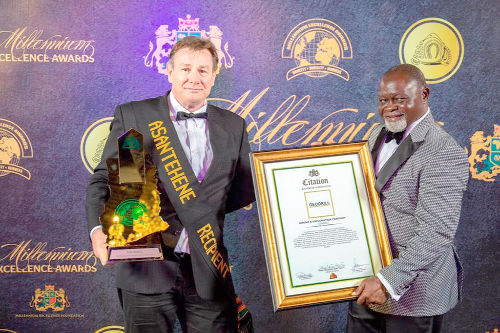 The Chief Executive Officer (CEO) of mining exploration and drilling company, Geodrill Limited, Mr Dave Harper, has said the company is poised to contribute its quota to the development of the mining industry in Ghana to the benefit of the people.

He said the company, which had invested heavily to provide drill and exploration services to mining companies, was keen on providing career opportunities to Ghanaians for them to benefit directly from the country’s mineral resource.

“The biggest impact that Geodrill has had on the communities is career opportunities which start with job creation. If you join Geodrill, the only thing that stands between you and success is yourself,” Mr Harper, who has naturalised and taken on the Ghanaian name, Yaw Mensah, said.

He said the company had put up a training facility at Anwiankwanta in the Ashanti Region with drill academy to train drill talents.

“Young people can join the company, if they have the interest and over a period have a career in drilling. Drilling is big business. For exploration requires drilling,” Mr Harper said.

Geodrill also has an exploration drilling company with operations in six countries. The other countries are Burkina Faso, Cote d’Ivoire, Mali in West Africa; Egypt in North Africa; and Peru in South America.

Mr Harper said the Millennium Excellence Award was a result of the impact it was making in the communities in which it was operating in Ghana, adding it would spur the company on to do more.

“The award is a huge validation of what we do. We cannot afford to rest on our oars, we would not give up. Geodrill will continue to be the leading exploration company in West Africa and other parts of the world,” Mr Harper told the Daily Graphic.

The CEO of Geodrill said the company had always invested in modern equipment and world-class operations to supply its' clients with a ‘one-stop’ drilling solution.

In West Africa, for example, he said, Geodrill drilled 1.5 million metres a year.

In terms of CSR, Mr Harper said, the company focused on the area of education. Its recent supports were to the Achimota School and the Tamale Senior High School with GH¢150,000 each for various projects for the improvement of academic activities.

The company also supported interventions in sports, health and safety.

“We take health very seriously and Geodrill has been a platinum sponsor of the children’s heart foundation. This is by providing the funds for one open heart operation. Every week, we support something,” he said.

In sports, Geodrill is a big supporter of the national boxing team, the Black Bombers.

Mr Harper said, for instance, ahead of the ongoing 2020 Olympics Games in Tokyo, Japan, the company had created the “Gold challenge” to give any Ghanaian participant that came back from the games with a gold medal, the cedi equivalent of $10,000 (GH¢60,000).