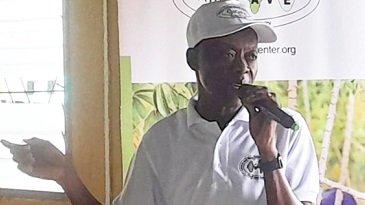 The Crop Research Institute (CRI) of the Council for Scientific and Industrial Research (CSIR) last Wednesday organised a training workshop for 120 cassava farmers in the Wenchi municipality in the Bono Region.

The training, which was aimed at assisting the farmers to identify diseases that infect the crop and prevent it from yielding the desired results, was part of the Central and West African Viral Epidemiology for Food Security (WAVE) being implemented in 10 Central and Western African countries.

The four-year project, which started in 2019, is geared toward promoting cassava products through the limiting of the effects of diseases that negatively affect the yield of the crop.

The project is being funded by the Bill and Melinda Gates Foundation and the United Kingdom Foreign Commonwealth and Development Office, with support from CORAF and the European Union.

In Ghana, the project is also being implemented in the Atebubu-Amantin municipality in the Bono East Region, Upper Manya Krobo in the Eastern Region and Akatsi South District in the Volta Region on the theme "Together, let's save our cassava".

During the training, the farmers shared their experiences on the diseases that they had identified on their farms and how such diseases had affected the yield of their crops.

They also told the experts about the measures they had adopted to combat the diseases which affected the leaves, stems, roots and tubers of the crop.

Cassava is very important in the food system of citizens, as the staple crop contributes about 22 per cent and 30 per cent to the Agricultural Gross Domestic Product (AGDP) and daily calorie intake respectively.

It is a food security crop because it is robust, produces more per unit area, and is versatile for multiple usages in household foods and derivatives.

It is in the light of these and others that the programme is being implemented to reduce the current and future threats of viral diseases to the root tuber crop.

The programme is also to ensure increased women's participation in scientific, monitoring and leadership activities to improve surveillance of root and tuber diseases.

Addressing the farmers, a Senior Research Scientist at the CRI, Dr Allen Oppong, mentioned anthrcanose and fire blight as some of the diseases that infect cassava and cause it to have poor yields.

He also stated that planting materials used by cassava growers should be carefully examined to ensure that only those which did not have infections were planted.

Dr Oppong, therefore, called on cassava farmers to always liaise with agricultural extension officers before planting, since they risked losing their investments should they plant materials which had infections.

He also asked them to mount surveillance on their farms regularly, and to treat their ventures as businesses by adhering to all the agronomic practices to enable them to reap the fruits of their labour.

Speaking to the Daily Graphic, a participant from Wurompo, Kate Obuor Amankwaah, said "I have learnt a lot. I now know how to deal with diseases affecting the yield of my cassava farm and I am ready to put in place measures to combat these diseases".

The participants were later taken to some cassava farms where they used the knowledge acquired during the training to identify some of the diseases affecting the crop.