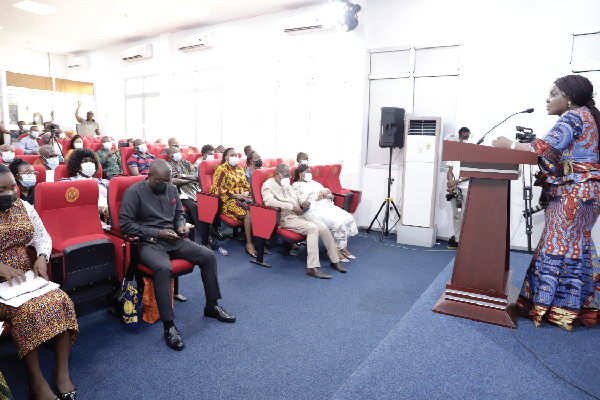 The Ministry of Gender, Children and Social Protection (MOGCSP), in collaboration with its partners, has introduced five electronic systems to help address sexual and gender-based violence, as well as challenges confronting children and the vulnerable.

Since their introduction in August 2020, they have enabled the ministry to effectively track cases of gender-based violence and those affecting the vulnerable, in line with the government’s vision of digitalising the various sectors of the economy.

The caretaker sector Minister, Mrs Cecilia Abena Dapaah, announced this in Accra yesterday when she took her turn at the Meet-the-Press series instituted by the Ministry of Information for ministries, departments and agencies (MDAs) to account to the people.

According to Mrs Dapaah, the OSC was a technology platform that provided information and support services for survivors of domestic, sexual and gender-based violence, including child marriage, in the country.

She explained that the OSC came in two folds — a call-in section (a toll free line) and a mobile app referred to as Boame App.

“The centre demonstrates the continuous efforts of stakeholders to bring to zero all forms of domestic, sexual and gender-based violence in Ghana,” she added.

At the OSC, she said, “there is a team of volunteers in the health, legal and psychosocial sectors who render relevant services in their fields of work to victims and survivors”.

Mrs Dapaah, who is also the Minister of Sanitation and Water Resources, said such an innovation and technology allowed for confidentiality

“The app permits users to call directly to OSC, send in text messages, voice notes or videos of the scene for appropriate support,” she said.

On the Single Window Citizen Engagement Services, the minister said the platform provided a one-stop shop for citizens to report grievances on major social protection flagship programmes for redress.

She said the programmes were the National Health Insurance Scheme (NHIS), the Labour Intensive Public Works (LIPW), the Livelihood Empowerment Against Poverty (LEAP) and the Capitation Grant.

“It also reduces administrative cost and provides database and analytical reports to record and monitor the progress of cases,” she said.

Mrs Dapaah said the SWIMS platform was introduced through the collaboration of her outfit and the United Nations Children’s Fund (UNICEF) to, among other objectives, document and report on the provision of social welfare services, such as child protection, social protection and gender-based violence, using standard national data collection forms, work flows, referral pathways and standard operating procedures.

Mrs Dapaah, who is a former NPP Member of Parliament for Bantama in the Ashanti Region, said under the LEAP management system, 831,150 female beneficiaries were identified, while 685,270 males were also registered.

According to her, the Greater Accra Region had the highest number of reported cases, with the Bono and the Western North regions having the lowest.

She said under the Single Window Citizen Engagement Services, 3,739 calls were received from a helpline dubbed Hope.

And under the SWIMS, the minister said, 4,864 cases were recorded, with child maintenance registering 1,864 cases, while 735 were child custody cases.