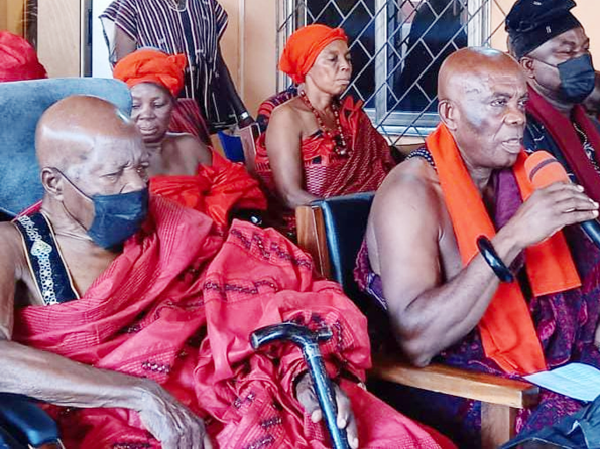 The Gbi Traditional Council in Hohoe have debunked rumours that it is planning reprisal attacks on the Zongo community in the area in a bid to resurrect a conflict between the two factions which occurred almost a decade ago.

The allegation, contained in an audio tape in circulation on social media, said the traditional council was colluding with people from Peki and Alavanyo, all in the Volta Region, to launch an attack on the Zongo community in the lead up to the burial of the late Paramount Chief of the Gbi Traditional Area, Togbega Gabusu VI.

While traditional authorities of both Peki and Alavanyo have distanced themselves from the audio, a joint statement by the Gbi Traditional Council led by its acting President, Togbe Worde IV, and leadership of the Zongo Community, also entreated people of the area to disregard the said tape.

"Chiefs, elders and the citizens of Gbi State and the leadership of the Zongo community with their subjects in Hohoe, unequivocally disassociate ourselves from this audio and condemn its contents in totality."

The statement, delivered on their behalf by the Left Wing Chief of the Gbi Traditional Area and Divisional Chief of Gbi-Wegbe, Togbe Keh XII, said "we found this audio as false, mischievous, irritating, destructive and orchestrated or to mar the cordial relationship between we the Gbis and the Zongo community in Hohoe".

He said the audio had the propensity to cause fear and panic. He, however, assured the people, that the council was collaborating with the Hohoe Divisional Police in order to commence inquiries and fish out the originator of the said audio.

"We, therefore, call on all and the general public to ignore the said audio and treat it with all the contempt it deserves.

The originator of the audio is being pursued."

Togbe Worde assured people of the two communities and sympathisers of utmost peace before,during and after the burial rites of the late Paramount Chief which took place from Tuesday, December 7, through Wednesday, December 15, 2021.

"We want to assure all and sundry that the peace in Gbi (Hohoe) is unquestionable and would be sustained during and after the burial of the late Togbega Gabusu VI."

A representative of the leadership of the Muslim community, Mr Ridwanu Meriga, said the audio in question did not reflect the cordial relationship that existed between the two communities and had no bearing on their zeal to foster peace and unity in the traditional area.

He, however, called on all and sundry to remain calm and disregard the tape in circulation.

The traditional council and the Muslim community shared a tumultuous history with a rift that led to communal clashes in 2012 which left scores injured and many properties destroyed.

The disputes had, however, been amicably resolved paving way for the two communities to coexist peacefully.